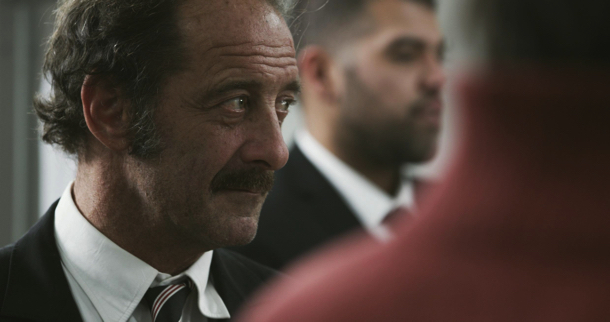 The Measure of a Man (Le Loi du Marche) |

Le Loi de Marche is a trenchant slice of social realism. It comes from Stephane Brizé, and is France’s equivalent of the Dardennes brother’s The Unknown Girl  that polarised critics in this year’s festival, and a rather better British equivalent of this year’s Palme d’Or winner I, Daniel Blake. Although not well-known outside France, Vincent Lindon has over 67 films under his belt and once dated Caroline de Monaco. He gets down and dirty here with that well-known elephant in the room: unemployment after 50.

In a sustained and sombre character piece, Lindon carries the film as Thierry Tagourdeau, a man in his early fifites struggling to make ends meet with his wife and disabled son, after being controversially sacked from a blue-collar job. Cleary there are legal ramifications here but Thierry sensibly has decided not to pursue an emotionally draining legal fight for compenation – and we can all feel his pain and empathise from the get go. Being unemployed as a student is one thing, but when there is a mortgage to pay and a social lifestyle to maintain, it is probably the most demoralising aspect of getting older. An emotionally charged opening scene is cleverly-balanced with rather a ridiculous one where Thierry and his wife are learning to dance. Whether this was supposed to leaven proceedings is unclear, but it has an almost derisory quality to it. Laudably, Thierry he knuckles down to his job search, including an embarassing ‘skype’ interview, every nerve and sinew is focused on self-improvement and self-justification – whilst a growing sense of dread and anger quietly takes hold.

Those who can’t appreciate Thierry’s predicament should count themselves lucky. Suffice to say Lindon gives the role his best shot; aided and abetted by his supportive wife as they trying to sell a second rate mobile home and deal with their son’s education issues. In one particular scene, where Thierry is undergoing a character assassination by fellow job-seekers during a presentation skills session, Lindon’s expression gradually wilts from calm acceptance of criticism to a sort of vacant hopelessness: so subtle is this facial transformation that it’s almost imperceptible: but nevertheless it’s one of the joys of this otherwise quite dour social drama. When Thierry does find work in supermarket security, a further twist presents him with a moral dilemma that finally breaks the camel’s back. As his perseverance finally lets him down, Thierry makes a hot-tempered decision that may have a negative impact on his family. Brize leaves us with the question: is it right to do something we are morally apposed to, for the sake of our family’s welfare?

This is perhaps not the stuff for a cheery night out, but as social realism goes, it’s well-crafted and bang on the button performance-wise with Lyndon giving it all he’s got in a role that feels real. MT