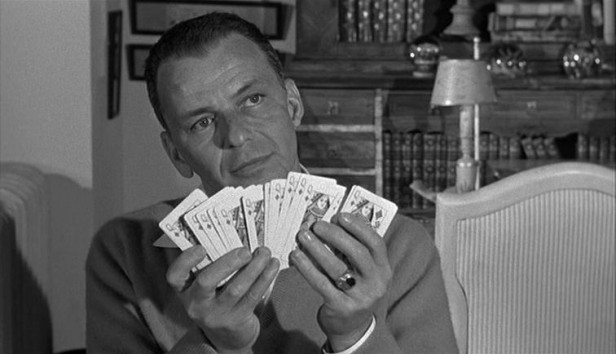 Political satire that doesn’t fall into crude caricature is a hard act to pull off. Paranoid fantasy can become a dramatic minefield. And a noirish thriller is in danger of stylistic excess. To take these genres and blend them to produce a lucid Cold War nightmare of a film that’s superbly intelligent, richly absurd, and grounded in a plausible political reality is remarkable. In 1962 director John Frankenheimer and writer George Axelrod adapted a very uneven novel by Richard Condon into an unforgettable film, The Manchurian Candidate.

It’s 1954 and the Korean War. After supposedly saving the lives of the men in his platoon, Sergeant Raymond Shaw (Laurence Harvey) becomes a highly decorated hero. Unfortunately he’s been brainwashed by the communists. And even more unfortunately his mother Eleanor Iselin (Angela Lansbury) is grooming the career of John Iselin (James Gregory) a right-wing McCarthyite politician. They’ve designs on capturing the presidency. Raymond is triggered by games of solitaire and phone calls to commit murder. Meanwhile Ben Marco (Frank Sinatra) Shaw’s former major has troubling dreams about Raymond.

Five minutes into The Manchurian Candidate we are confronted with one of cinema’s most audacious dream sequences. At a meeting of a Ladies’ Garden Club. the men of Raymond’s patrol are bored out of their minds seated on a stage. Huge posters of Chairman Mao and Stalin are behind them. A scientist from the Pavlov Institute in Moscow, asks Sergeant Shaw to murder two of the soldiers. The lecture entitled “Fun with Hydrangeas.” accompanies his brainwashing. This amazing dream conveys a mental stress that doesn’t appear contrived or abstracted (perhaps only the oedipal conflict of Pedro’s dream of his mother and a hunk of meat in Bunuel’s Los Olvidados has a similar power to be rooted in genuine anxiety).

There are other wonderful set-pieces. Sinatra and Janet Leigh’s very odd and tense conversation on a train; a karate fight; the fraught confrontations between Shaw and his mother and the subsequent murders en route to a planned assassination.

One of the most disturbing moments is profoundly simple: Shaw stands watching in horrified disbelief at the military brass that has assembled to congratulate him. A voice over narrator drones on about Shaw’s bravery. For ten seconds the military and Shaw do not know quite when, or how, to respond. It’s a fantastic example of a perfect cinematic pause tilting on the edge of madness.

Frankenheimer’s gripping direction is supported by Axelrod’s playful and ambiguous script. The acting is first class (Sinatra, Harvey and Lansbury have never been better). Wonderfully atmospheric visuals are assisted by brilliant editing. Whilst David Amram’s music allows itself a pleasing atonality.

The plot of The Manchurian Candidate has been called far-fetched. Far-out better describes it, for this masterly film has not lost one iota of mystery, downright strangeness and relevance. In the current Donald Trump / Hilary Clinton campaign, with its suggestions of political assassination and bitter criticism of establishment misrule, The Manchurian Candidate’s “reds under the bed” could now be read as “the enemy within” morphing into our disturbed selves. Alan Price