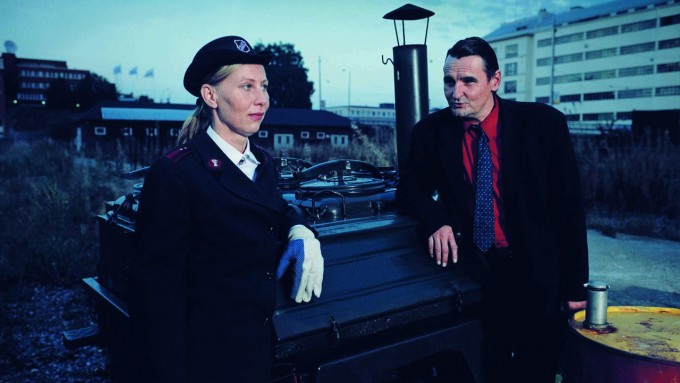 Like many auteurs of his generation, Aki Kaurismaki is entirely self-taught. After a working life spent as a postman and film critic amongst other things, he turned his hand to film-making in the eighties and has been incredibly successful in his endeavour, producing his own films and distributing them through his own company Alphaville, and even showing them at his own arthouse cinemas in Finland. Often working with his elder brother Mika, they have shaped the face of Finnish cinema, crafting one-fifth of the Finnish film industry’s total output since 1981.

In love with the past and Finland’s lugubrious hard-drinking working classes, often down on their luck – anything post 1980 does not interest Kaurismaki visually and he made this retro look his trademark. The Man Without a Past sees him create another antihero, this time the director doesn’t even give him a name, in the credits he is just ‘M’.

M (his beloved Markku Peltola) arrives one Spring evening in Helsinki, with a small suitcase. Resting on a park bench he nods off and is attacked by three young men, who leave him for dead. Coming round in a rain-soaked stupor, he makes his way to A&E where retrograde amnesia is diagnosed. Discharged from hospital and homeless, he makes his way to a container site where he rents a place to rest his head from a conman called Antilla (Kuosmanen). The geezer exploits those down on their luck. His ‘fierce’ dog Hannibal turns out to be submissive, snuggling up with M on his bed. All this plays out with Kaurismaki’s classic blend of eccentric situational humour which is light on dialogue and heavy on innuendo.

M can’t remember a thing about his life but when he catches sight of a couple of metal workers down near the port he feels a strange affinity to their daily grind, leading him to believe he was a welder in a former life. Turning to the Samaritans for help, he falls in love with Irma (Outinen) and a new lease of life. Soon he’ part of a swing band with the local Samaritans, and manages to secure some welding work. But his luck turns sour when he gets caught up in a bank robbery and this brush with the police leads to his identification. It soon emerges he was married, but his wife divorced him on account of his gambling. When M travels back to his home town by train he finds her living in their former marital dwelling with a boyfriend. M is only too relieved he doesn’t have to fight it out with his rival, returning back to Irma in Helsinki and eventual revenge.

Kaurismaki’s classic absurdist humour is an acquired taste and The Man Without a Past is one of the best examples. When M cooks dinner for Irma in his container, she asks politely “Are you sure, I can’t help”. His deadpan response is: “I think it’s ruined already”. Later when an electrician has helped him connect his container to a power source, M asks how he could return the favour. The man answers matter of factly: “If you see me lying in the gutter face down, turn me on my back”.

Kaurismaki is best compared with Preston Sturges and his comedies of the 30s; his heroes are like the actors Buster Keaton used to preferred, “they can’t raise their voice, their only reaction are furrowed brows”. DOP Timo Salminen, who shot nearly all of Kaurismaki’s films, shows Finland as a morose country where suicide, poverty, hunger and alcoholism is rife. All this is borne, (according to the director) “out of the change in society from a mainly agricultural country, to an industrialised one – many feel rootless and alienated from the country, in a place where high rise blocks and unemployment kill the soul. ” This, and his beloved band music, are the touchstones of his film career that started in 1991.

The Man Without a Past won the Grand Prix at the 2002 Cannes Film Festival, Kati Outinen best actress. AS