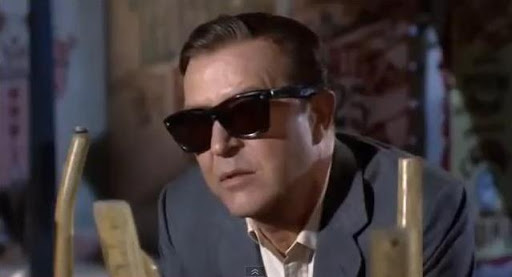 Drawing comparisons with Jack Arnold’s Incredible Shrinking Man this gripping foray into Sci-fi showed Roger Corman capable of inventive storytelling as well as horror in this enterprising low budget thriller with a razor sharp wit that stars Ray Milland in the leading role. It even has a forward- thinking female role in the shape of Diana Van der Vils who plays a vampish pearl-rocking blond Dr Diane Fairfax, who also provides the romantic twist.

Space exploration had captured the collective imagination of the cinema-going public for all things scientifically ground-breaking in the early 1960s and The Man with X-Ray Eyes buys into this vibe. There’s also ‘something of the night’ about Ray Milland, despite his sparkling blue eyes, and these take on a superhuman power for his character Dr James Xavier who has invented a serum for championing human vision.

Set in Las Vegas, Nevada – we get to see blue skies and palm trees – but the action mainly takes place in the confines of labs and domestic interiors (aka the studio). At first his vision leads to cheeky revelations about women’s underwear and even their spines! Twisting with a blond who picks him up at a party he comments on her (hidden) birthmark and underwear: “Remember I’m a man”: he jokes lasciviously, and she quips back:”Remember I’m a woman” taking him off guard, realising he has been successfully pulled, and gets his coat.

But things get serious when he discovers that his serum has a cumulative affect, giving him the ability to see inside a patient’s body to their veins and organs during an operation, and his colleague threatens him with malpractice. But Xavier is not afraid: “Soon I’ll be able to see what no man has ever seen”. And this knowledge is power. So much power that he accidentally throws his colleague out of the window during the ensuing contretemps.

Forced to go on the run, Corman gets the chance to cast the brilliant Don Rickles as Dr Xavier’s stooge/compare when he embarks on a foray as a fortune teller in a bizarre turn of events. And soon he’s seeing to much for his own liking, donning an enormous pair of dark glasses that give him a striking resemblance to Ricky Gervais.

Overnight he becomes a miracle worker, treating the sick but also seeing the downside of his gift, which works both ways, showing him the sinister, seamy side of humanity warts and explores the ethics of power: In the process he loses his empathy for the common man.

Corman avoids sensationalism creating some rather clever visual affects that are in keeping with the integrity of the performances and thematic strength of a story that explores the moral side of Xavier’s powers, and the nature of what it is to be human. Corman was forced into a studio-dictated ending which is nevertheless reasonably satisfying, Ray Milland carrying the film from start to finish. And whatever the question was at the beginning, love was always going to be the answer. MT