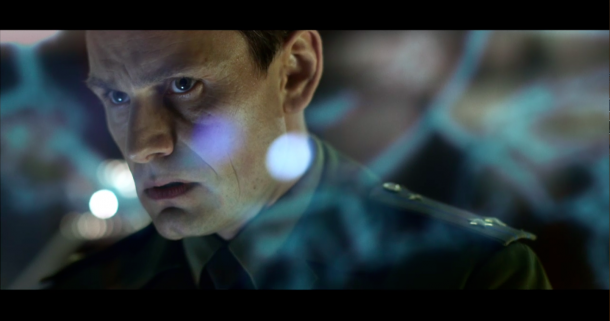 We are often asked, depending on the generation, where we were when Kennedy was shot or when the Twin Towers came down. After watching THE MAN WHO SAVED THE WORLD by first time Danish director Peter Anthony, we should now ask “where were you on the evening of September 26th 1983”. Because on that very day, the world could easily have come to an end, had it not been for the Russian Lieutenant Colonel Stanislav Petrov. Commanding the Soviet Air Defences Forces that evening, he spotted on the computer screens, no less than five US missiles being launched against his homeland.

A less inquisitive person would have simply ‘believed’ the technology to be right, after all, we were at the height of the Cold War, President Reagan famously stating that he “wished his daughter would die right now, rather than having to live under Communism”. But Petrov hesitated in informing his superiors, gambling – rightly – on his hunch, that the appearance of the missiles on the screens were due to a computer glitch. Had he been wrong, the Soviet Union would have been decimated, as there would have been no time for retaliation.

Peter Anthony’s masterful debut operates on three levels: there are the usual documentary clips: Petrov’s visit to the USA, where he met Robert de Niro and Kevin Costner among others,  a re-staging of the crucial day’s events, as well as Petrov’s personal traumata after 1983, with Sergey Shnyryov playing the lieutenant colonel so brilliantly that it’s occasionally possible to forget that he is not the real Petrov. And this is by far the most moving part of this drama: Petrov’s personal tragedy starts with a severe reprimand after the evening’s events and for not having correctly filled in the daily report. Later, he has to leave the Forces to care for his wife Raya, who is dying slowly from cancer. Petrov is left alone and embittered, even deserted by his own mother, who preferred to live with her younger son, her favourite. Since then, Petrov has not seen or even spoken to his mother, but has retreated into himself, seeking solace in the bottle. When we are introduced to (the real) Galina Kalinina, Petrov’s interpreter on his journey to the USA, the family conflict immediately surfaces, Petrov shouting at her, for just bringing up his mother’s name. Later, in the USA, where Petrov is lauded at the UN, Galina tells him bluntly “You want countries to forgive each other, but you cannot even talk to your own mother”. Needless to say, Galina rightly described as “stubborn” by Petrov, makes sure of a moving reconciliation.

THE MAN WHO SAVED THE WORLD is a unique film, its three strands seamlessly interwoven. But it also carries a prescient wake up call to us all, since the Superpowers still have all their nuclear arsenals pointing at one another. When shown a silo with a Minuteman II missile, Petrov explains to a US park ranger that its destructive power is equivalent to that of  the entire WWII arsenal from 1938-1945. When we consider that both sides each have in excess of a thousand missiles left, let’s pray that a future crisis will again be averted by somebody like Stanislav Petrov. AS