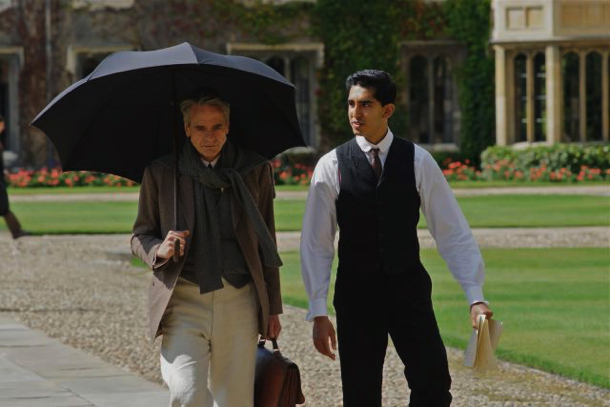 The Man Who Knew Infinity attempts to make maths as exciting as the discovery of a new plant species or the cure to cancer in this lush and impressively-mounted turn of the century drama. Blinding us with numbers and equations scrawled in chalk across a blackboard, the maths geniuses slave over desks replete with crumpled formula-filled papers and burn the midnight oil to prove their theories in the hallowed rooms of Trinity College of Cambridge, mesmerising us with this arcane subject matter but leaving us none the wiser as to their tangible achievements by the time the credits roll – there is a banal footnote about black holes in the final scene – but how could maths be so emotionally involving and melodramatic as it is portrayed here? The answer is in the personal story of an man who came from obscurity to share the academic limelight with the ‘luminaries’ of the early 20th century – the only one that stands out to most people will be Bertrand Russell.

In Matt Brown’s exquisitely-crafted sophomore drama, Dev Patel and Jeremy Irons are engaging and imminently watchable as intellectual sparring partners: beautifully attired in their hand-tailored tweed and starched collars, they make a formidable and mildly fascinating couple of spiritually-edged geeks. And there is the cherubic Toby Jones looking genuinely benign as another leading light of figures, John Edensor Littlewood. Matt Brown’s script, appropriately for the era and context, contains lashings of racialism and prejudice towards the Indian 25-year-old prodigy who sprung from the backstreets of 1913 Madras with his ground-breaking theories on continued fractions and pure maths to struggle to the heights of English academia – a spiritual vegetarian in a college where the ‘loads of grub’ largely consisted of meat. The Man Who Knew Infinity is certainly appealing for mainstream audiences who enjoy intelligent dramas but those looking for a biopic of greater ingenuity in its specialised subject, might find this a trifle unsatisfying – if so – the indie title ‘Ramanujan’ is likely to have more appeal.

Adapted from Robert Kanigel’s 1991 biography, this is certainly an entertaining story  with its blend of exotic Madras settings counterpoised with the ethereal backdrop of pre-war Cambridge. The young self-taught Sri dedicates himself to the study of maths forsaking his job as a clerk; his overbearing mother (aptly named Arundhati Nag) and his newly married wife Janaki (Devika Bhise), to beat a path towards England where, hoping to be published, he writes a letter to Professor Hardy who immediately seizes on his brilliance, offering him tutoring at Trinity, despite the open hostility and racial prejudice of the crusty old dons – amongst the most cantankerous being Professor Howard (Anthony Calf). There, in a cramped single room, he eschews nutritional and emotional support (his mother intercepts his wife’s letters) to tirelessly expound his theories which, he claims, are instinctively enlightened and spiritually inspired by his Hindu religion. Hardy is a hard-nosed academic who has no time for love or religion and is more interested in form and discipline than inspiration and free thought, while the generous-spirited Bertrand Russell (a fine Jeremy Northam) urges Hardy to “let him fly”. That said, Irons plays Hardy as a tremendously empathetic and supportive character and not in the least dry or leaning towards Asperger’s, as one might be tempted to expect. Patel brings an energetic sensitivity to his role, with the delicate elegance of an exotic fawn, he is also feisty and diligent.

But as Ramanujan’s health deteriorates with tuberculosis, the mawkish flashes to Janaki pining on the beaches and temples of Madras start a downward spiral in the dramatic tension. The final scenes of this memorable biopic are deeply affecting: not so much because of Ramanujan’s ailing health, but because of the astonishing impact he steadily makes on his intransigent ageing peers in their ivory towers. MT

ON RELEASE FROM 8 APRIL 2016 NATIONWIDE.