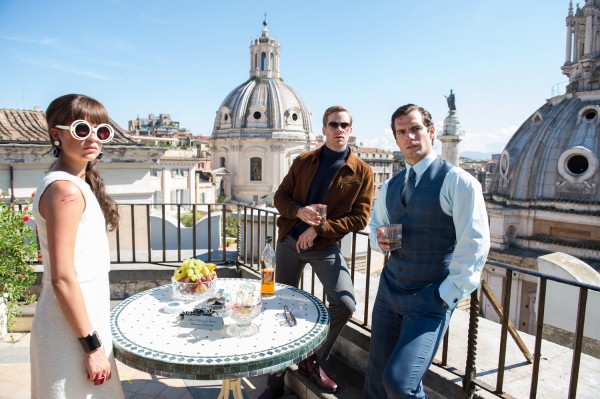 The Man From U.N.C.L.E was an iconic 60s TV series whose cool characters and Cold War credentials will remain burnt into the memories of devotees of Adam Adamant and The Saint. Guy Ritchie and his scripter Lionel Wigram attempt to update and re-badge the spy thriller as a Euro-trotting upmarket macho mens’ comedy caper with sexy ‘birds’ dressed up to the nines and glib guys in poorly-tailored suits; what we get is a Chavish dollop of Eton mess.

There are some really good ideas: the early 60s production detail is spot on and so is the female haute couture – but for the most part it’s a self-indulgent romp that lacks form, charisma and, crucially, clout. Male leads Henry Cavill (Napoleon Solo) and Arnie Hammer (Illya Kuryakin) are supremely dull and, worse still, rather fond of themselves: Critically, they lack the style and suave charisma of Robert Vaughan and McCullan despite their breezy male model modishness. The only entertaining performances come from a pert and pint-sized Audrey Hepburn-styled Alica Vikander, and Hugh Grant as a British intelligence chief Waverly, who walks through his role with the consummate ease of a craggy test pilot.

The original storyline is loosely intact with Napoleon Solo as an American agent in a Cold War East Berlin who is tasked with tracking down a missing nuclear scientist whose perky tomboy daughter Gaby (Vikander) plays an unlikely female car mechanic in the capital. But her chicly sinister Daddy (Christian Berkel) now appears to be working for an Italian nuclear power magnate who is seeking to gain control of the world. Naturally,  the CIA and KGB want to control the world so, in order to bring the Italian super-magnate Alexander Vinciguerra (a simmering Luca Calvani) down to size , Solo is ordered to collaborate with Kuryakin, who, in a bizarre twist, is  forced to go undercover as an architect.

As Illya, Armie Hammer  is all pouty and gorgeous as the truculent Soviet spy (cum architect) who grudgingly falls for Gaby. As Solo, Caville’s main problem is fitting into the confines of his tailoring without popping out and looking gauche, an endeavour which doesn’t entirely succeed, leaving him glib. The constant hotchpotoch of action-scenes and lacklustre dialogue feel more tedious than tense as we are subjected to an onslaught of style over substance: in this mesmerising mess of European milieux, it’s very much ‘the price of everything versus the value of nothing’. The feline Elizabeth Debicki (Vittoria Vinciguerra) is the one to watch on the elegance front as she glides stealthily through her domaine, like Gustave Dore’s wife of (Alexander Vinceguerra’s) Bluebeard; delivering her lines with insuciant aplomb: she is a joy to behold.

Guy Ritchie’s caper has some clever ideas and it certainly whisks you away to some fabulous hotspots: Rome, Berlin, Goodwood, and Naples to name but a few.  But the overall impression is a scattergun of entertaining, stylish and laughable moments that lacks any formal discipline to deliver a satisfying experience: At one point the whole thing feels like an extended advert for Cinzano Bianco – without ice or the slice. MT