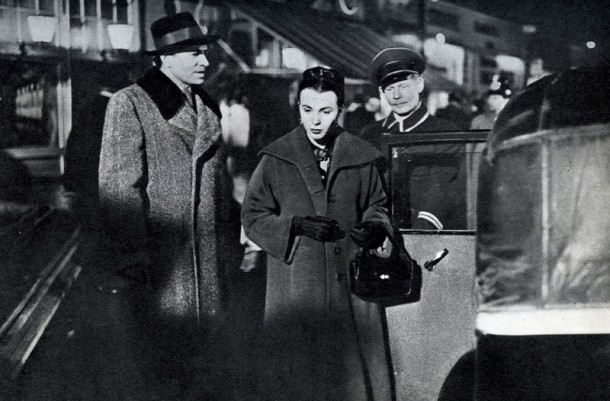 Often compared (wrongly) to Carol Reed’s classic The Third Man, the director’s Berlin version of the Cold War, as shown in The Man Between, is very much a British affair played out in post-war Berlin. Whilst Reed could not shoot in East Berlin – were much of the second part of the film is set, he and DoP Desmond Dickinson (Hamlet), filmed at the border between East and West Sector, providing atmospheric highlights, which compensate for a sometimes erratic narrative.

Susanne Mallison (Bloom), a headstrong young British woman, visits her brother Martin (Tone) in West Berlin, where the ex-officer is married to a German, Bettina (Knef). Susanne soon finds out, that Bettina is harbouring a secret from her husband: there are too many unexplained incidents, like a young boy on a bike, who seems to follow Susanne. On an excursion to the east of the city, Bettina introduces Susanne to the sinister Ivo Kern (Mason), a dubious character, who seems to have a hold over Bettina. As it turns out, Kern is not only a spy for the east German racketeer Halundar (Waescher), but also Bettina’s ex-husband, who went missing during the last year of the war. Since his very existence invalidates Bettina’s marriage to Martin, Bettina tries to please Kern and helps him with his schemes, which mainly consists of kidnapping West Berlin citizens to the east. Australian ex-soldier Olaf Kastner (Schroeder), who helps East Germans to escape to the West, muddles the water even more. Finally, Susanne is kidnapped by Halundar’s strongmen by mistake, and Kern has to make decision.

Reed’s Berlin locations are very evocative, the images of the defeated capital of the former master race, show the former rulers of Europe living (still) in
ruins. But there is a sort of progress too: at a visit to the ‘Resi’ restaurant, Susanne discovers a very American atmosphere, were every table has a telephone, used mainly by agents and black-market dealers. Bloom is very convincing as the romantic English woman, whilst Knef is a little over the top, raising her voice too often. Mason is very much like the central character in Reed’s Odd Man Out: permanently fleeing from troubles, caused by dishonesty in the past. Based on the novel ‘Susanne in Berlin’, by the German author Walter Schuler (aka Walter Ebert), Hollywood veteran writer Harry Kurnitz delivered a disappointing script. After the location shooting in Berlin was finished, Reed returned to London for the studio scenes, and asked Graham for help, before hiring a script doctor to save as much as possible. Nevertheless, Dickson’s grainy black-and-white images create a post-war noir world, in which the past is often stronger than the present. AS