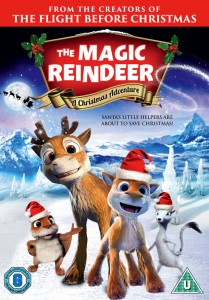 Nico the reindeer has a father who was in the flying forces to help Santa. Nico could fly, because he had some of his father’s genes. They were going at Santa speed, and the father said “if you want to go at Santa speed, you have to have a big heart, open eyes and look up”. Nico’s mum had met another man after her divorce, and this man had another son, with a different woman, so now Nico discovers a half brother. He doesn’t like the fact that his mum met somebody else, particularly he did not like his new half-brother. After Nico slept, his best friend, a flying squirrel, said that the little brother was cute.  Nico goes with the little boy into the woods to play hide and seek. They hid, but an eagle took the little boy and Nico chased after them, but he lost them. He tried to find them and he bumped into another reindeer. They walked together to the eagles domain, where they found the little boy. Then they met the white wolf, the leader of the eagles, she wanted to take revenge, killing his brother, and they run away. They went back home, and the stepdad was talking to Nico’s dad. The eagles broke into Santa factory and placed a booby trap. But Nico trapped the wolf in a box, and they run away. Santa flew away delivering presents.

It was brilliant animation, the story was perfect and I would like to see a sequel being made. DP

First a boy, Zach wakes up and sees Santa. Then Santa disappears. Then Zach and his sister Miley are watching TV and find out that an evil politician, Schmucker, is banning Santa robbing him of his magic powers. The two kids go to school. In the lessons the girl was drawing a Santa, but the teacher came over and said: “What are you drawing?” She said: “I am drawing a picture of Santa, because nobody believes in him.” The teacher whispers to her “I believe in Santa”. After that Schmucker comes and says: “Don’t talk about Santa, because we are banning him”. Then it was playtime, the girl went outside and she saw a Santa’s coat hanging on the wall, and a man ripped it off and threw it on the floor.

When Miley and Zach get home, the girl saw a gleaming light in the barn, and they went into the barn and saw Santa. But when they opened the door, there was nothing there. Then their mother gets ill. But the two children pretended to be ill too, because they want to save Santa, who was dying, because nobody believed in him. The mother came home from the hospital and told them she had cancer. The children made their own YouTube video about Santa, and send it to all websites. Everybody saw the video.  The evil politician sees the video and he and the children have a debate about Santa on TV. Later the politician meets Santa, and he says to him ,” all you needed was love, but you didn’t get it, because your parents thought giving you toys made you happier than their love”. Santa’s magic powers come back and on Xmas night Santa uses his magic to save the Mum.

The acting was good but not great, the camera was alright, but it is the the design I liked best, particularly the house, it was real. The story was very sad, but it had a happy ending.

THE GREAT SANTA RESCUE IS AVAILABLE ON DVD

JOURNEY TO THE CHRISTMAS  STAR, reviewed by Daniel Pyszora, 11

The story is about a little princess, who was looking for the Christmas star, and then  an evil witch made the her disappear, putting a curse on her. Her father, the King, was really distressed and her mother died from grief. The King had to find the Christmas Star in ten years, to get his daughter back. He looked for nine years, but no hope of finding her. Sonja, a young girl, was working for a woman who was really horrible to her, and who had other people who stole for her jewellery and food. One day they nicked lots of jewellery, but Sonja walked trough the door and ran away to the city. When she was in the city, she saw a horse carrying people, and she saw a white cloth, and hid under it, whilst the thieves working for the bad lady were chasing her. The horse caravan entered the castle and Sonja went into a big hall in the castle, and there she hid behind a curtained door, and she observed a meeting with the King; they were talking about the Christmas Star. The King took her into his room, where they talked about the Christmas Star and how to find it, and she said she would find the Christmas Star. Then she went off into the woods, but the evil witch was after her, but a little boy shrunk her and invited her into his tree house, so they could get away from the witch’s helper. Then she mentioned to the boy the Christmas Star, and the boy knew a bear who could help her to get see the Christmas Star. Then Sonja met a flying cloud, which flew her to the North Pole, where Santa Claus lived. There she met Santa Claus, and asked him where the Christmas Star was, and he said “it is in your heart”. She travelled back to the castle, and the King asked her “where is the Christmas Star”, and she said it is in my heart, and a shining Christmas Star came out of her body and it shone up to the sky and everybody could see the Christmas Star. And than there was a happy-end for everybody.

The acting was good, the girl who played Sonja was the best. Lovely sets, and the story made you interested in the film, it draws you in. The camera’s views were brilliant, they were showing everything important. It looked very realistic. It should be an “U” certificate, for younger children. But there was no comedy, which I like most, therefore it gets only four stars. DP

JOURNEY TO THE CHRISTMAS STAR IS AVAILABLE ON DVD MRP £5.99