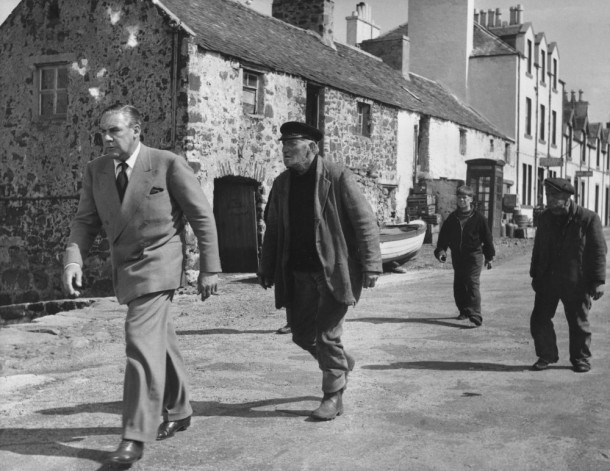 Alexander MacKendrick was far from satisfied with his finished comedy drama The ‘Maggie’,  claiming it too personal, but he scored a hit with his casting of Paul Douglas in the leading role. A sports reporter who had turned his hand to acting in middle age, he became an overnight Hollywood success during the forties and fifties starring alongside Barbara Stanwyck in Clash By Night, Richard Widmark in Panic in the Streets and Kirk Douglas in A Letter to Three Wives. The five-times married actor exuded a rugged masculinity which perfectly suits the role here of an American businessman in Scotland who is conned into shipping a valuable cargo to Islay to furnish a surprise gift of a holiday home for his wife (whom we never meet). The coal-powered boat turns out to be a leaky ‘puffer’ from which the film takes its name.

Sentimental in tone, this light comedy zips along playfully in a similar vein to MacKendrick’s other outings although it lacks the witty humour of Whisky Galore, or the more trenchant social commentary of The Man in The White Suit. That said, there are well-crafted performances from a strong cast particularly Tommy Kearins, a newcomer who gives a surprisingly good turn as the clever and mischievous ‘wee boy’ Dougie. Gordon Dines does a fine job of lensing fifties Glasgow, Crinan and the Isle of Islay in silky black and white visuals. The Radio Times described it as a “wicked little satire” and the pier scene will certainly make you laugh out loud. A worthwhile comedy drama from the Ealing era. MT