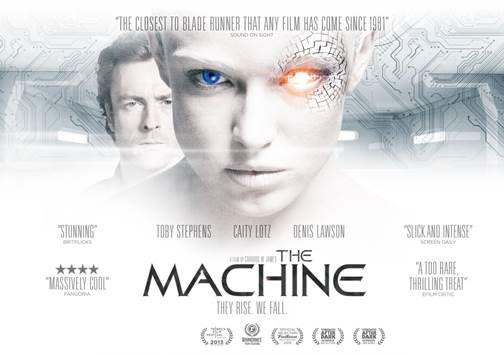 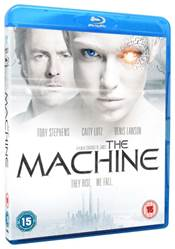 THE MACHINE is one of those stylish sci-fi thrillers worth searching out even if you ‘hate’ sci-fi. When you see Toby Stevens and Denis Lawson amongst the cast, you know things are going to be alright. With a hidden heart (albeit one of steel) and set against a plausibly futuristic cold war scenario with China, a human story plays out where intelligent robots are being secretly developed to fight the good fight not just the antagonistic, violent one.

Working with a palette of subdued metallic greys and chilling backlighting, director Caradog James compliments his foray into the imagined unknown with an electronic score that crystallise this ‘retro’ brave New World, evoking a dazzlingly sinister ambience despite a low budget.  The script is also rather clever in that it leaves a great deal to our imagination almost leading us to believe that the future can be bright, even though it’s a cold-eyed brightness.

In this second feature from British writer and director Caradog James, Toby Stevens plays Dr Vincent McCarthy, a rather soigné engineer who designs brain implants for injured soldiers at the Ministry of Defence. Behind his noble facade there lurks a nagging sadness over his daughter’s deteriorating mental illness, and he’s secretly hoping to find her a cure, utilising the funds of the MoD. There are concerns regarding the ethical aspect of his work for the Government but he’s prepared to turn a blind eye to all this in the public interests until a rather appealing new scientist joins the team in the shape of Caity Lotz who manages to be both appealing and restrained as Ava. An engineer and designer in her own right, she has developed a clever AI robot that beats as it sweeps: building knowledge from its human interactions. She’s also an attractive blonde and with Dr McCarthy, the chemistry crackles, and we’re not just talking about neurones.  Her expertise compliments Dr McCarthy’s ability to create lifelike bodies endowed with bionic strength so seemingly they’re home and dry with a solution.  The problem is we’re only halfway into the action.  And matters take a sinister turn when Ava is fatally injured.  Wracked with anguish, Dr McCarthy’s morals take a nose dive as he decides to use her brain power to flesh-out his artificial bodies and create an android clone aka ‘The Machine’. But there’s a twist in the tale and it involves his draconian boss Thomson – enter Denis Lawson. MT