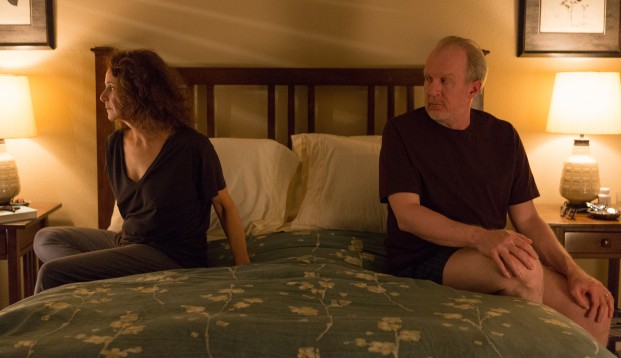 Writer/director Azazel Jacobs (Terri) seems unable to make his mind up whether THE LOVERS should be a farce; a comedy character study, or simply a rom-com. In the end it falls between all stools, the capable cast is left with a banal script and even worse dialogue: the story of a married couple who fall in and out of love simply degenerates into an endless loop of boredom. Mary (Winger) and Michael (Letts) seem to have passed the sell-by-date in their marriage and have both taken lovers to relieve the daily tedium of their jobs. They can hardly stand each other at home, and their long-term lovers, Robert (Gillen), a so-so successful writer, and Lucy (Walters) a dancer and ballet teacher, are distraught with cajoling each one to commit to relationships that have no convincing backstory but seem to provide light relief. The prospect of a visit from Mary’s and Michael’s son Joel (Ross) and his girlfriend Erin (Sula) offers an ideal opportunity for a final showdown, and both promise their respective paramours that after the kids have left, they will throw in the towel.  But alas, a chance encounter in bed rekindles old flames, and even though the split seems final, it’s far from the end. Shot mostly in domestic and office locations, this has the feeling of a TV series of the 1970s, when bed-hopping was something new. But Mary and Michael, are so dull and suburban as characters: apart from sex they seem to have no other interests in their work, or the creative pursuits of their lovers. Finally it emerges that Michael was “once into music”, and to prove it, Michael shows he can still tinkle the ivories of their piano that became a sideboard. But soon, even this narrative string is discarded for more of the same old nonsense – involved Lucy actually hissing like a cat at Mary, who sits baffled behind the steering wheel of her car. Jacobs has realised the eternal truth: that longterm menage à trois, can only function as such and marrying a lover, creates another vacancy. Some relationships are clearly never meant to end, but you really can’t wait for this tedious merry go round to stop and let you off.  AS