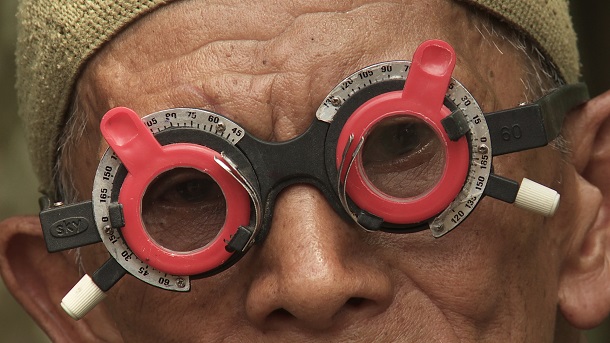 Joshua Oppenheimer’s extraordinary documentary The Act of Killing was such a left-field way of  presenting a documentary, exploring such harrowing events, it’s no wonder that The Look of Silence might disappoint as it follows a more established convention. But to say this latest work is orthodox would be grave mistake. Even as a companion piece, this further exploration of Indonesia’s sixties genocide remains a horrifying study: personal, shattering, and stunningly photographed.

Up to a million people were murdered in the purges of 1965-66 as the Suharto coup sought to take control by terror. Communists were the named enemy, but it was really anyone who was against the government at the time – dissidents, artists, intellectuals, as well as the Chinese minority in the country. Almost fifty years later, the perpetrators of appalling acts live in the open, and in all ranks of government, while the descendants of those killed, marked “politically unclean” have had to live in fear of reprisals.

In The Look Of Silence Oppenheimer follows Adi, an optician whose brother Ramli was murdered in 1965 in a gruesome attack that is boasted about by its smiling perpetrators. Adi, born several years after his brother’s slaughter, travels around fitting glasses to the those who were around, while asking questions of the past to the bemused interviewees we learn were subjects of Oppenheimer’s studies for Killing.

According to press notes (but not mentioned in the film), Oppenheimer set out to make a more straight-forward documentary than what was released almost ten years later in Killing, but if The Look of Silence was his final accomplishment, Oppenheimer could still boast an tremendous achievement. The wealth of research he pursued is just as clear here. Adi watches clips from unused interviews in stunned silence – just like the population featured throughout. How else, you might say, can you react?

Adi confronts the killers without desire for revenge, but that’s almost what happens. Nobody gets thrown prison, but instead they’re confronted with the dead coming back to life. One perpetrator calls it a “wound” that’s just been reopened, another asks “why should I remember if remembering breaks my heart?” Maybe that’s a form of revenge, or maybe revenge is best when, as in one scene, the daughter of a killer apologises on behalf of her obstinate father, as if to perform the reconciliation her country’s previous generation were too twisted to consider. Perhaps Oppenheimer is confronting the critics who said The Act of Killing didn’t give a voice to the victims. In fact, he did, but Killing was the wrong film for it.

Why is this important? Children at Indonesian school have been indoctrinated for decades that the killings were for the good of the country (as we witness in one harrowing scene), and former gangsters and paramilitary leaders are a backbone of society. We meet the head of the regional legislature, who dismissed his role in the massacres as: “That’s politics, achieving ones ideals in various ways, isn’t it?” Then he laughs, straight into camera. Indonesia, a country of 240 million people, with wide natural resources, has never reached the capacity it could reach – economically, socially or spiritually. For this sprawling, vast, but beautiful nation, it’s the future with which Oppenheimer’s films are most concerned. Ed Frankl

THE LOOK OF SILENCE was reviewed at VENICE INTERNATIONAL FILM FESTIVAL