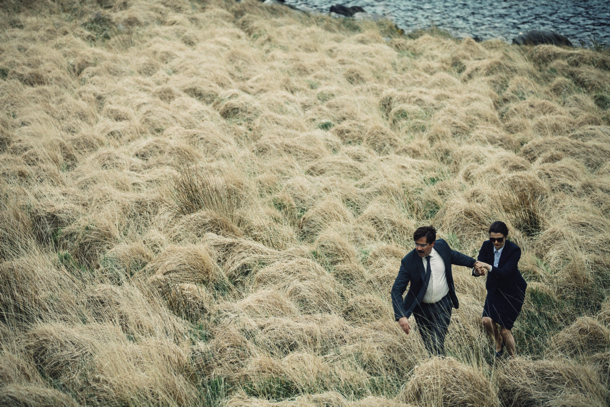 THE LOBSTER is a cold-edged, dystopian sci-fi thriller set in an imagined near-future where citizens must choose a mate or be transformed into the animal of their choice. This is Dogtooth director, Yorgos Lanthimos’ first film in English and the first with a starry international cast, who give the impression of being ‘honoured’ to be there playing ridiculous roles with a script rammed with sexually explicit dialogue along the lines of: “I dreamt you fucked me up the ass” and so forth.

Colin Farrell has even developed a massive paunch for his part as David, a deadpan dork who has recently been dumped by his wife and arrives at base camp, one of those ghastly conference-style hotels with “luxury” over-stuffed pillows and maroon-tiled bathrooms, with his brother, Bob, who is now a sheep dog.

Later it emerges that the place is run by smug provincial marrieds (an erudite Olivia Coleman and Garry Mountaine) who give them 45 days to partner up with fellow interns or succumbing to their bestial fate. David choses to be a lobster because he likes swimming and wants a long life. As these harried citizens begin their pressurised life, they acquire nicknames defined by idiosyncratic traits: Limping Man (Ben Whishaw); Lisping Man (John C Reilly) and, like online daters, they are forced to find common interests and similarities in the hope of hooking up, whereupon they get to share a double room and are then assigned ‘children’. “The heartless woman” has been so successful in her dating efforts that she has been given a hundred extra days of human existence.

This theatre of the absurd takes place in deadpan seriousness as leaden clouds scud by in a moss-covered landscape. David eventually lucks out on a date with ‘Heartless woman” and the two have dispassionate doggie-style sex while she is wearing her undies. But, true to form, she finds dating dissatisfaction with David, and quietly slaughters sheepdog, Bob, on the white-tiled bathroom.

While Hackney viewers will be desperate to acquire the DVD/blu for “cool” nights in, other audiences may find this film quite tedious and obdurate in its desperation to be obtuse. There is a saving grace in David’s meeting with “Shorted sighted woman” (Rachel Weisz) who is part of the ‘loner’ party wandering around in the local woods and lead by a love-averse Lea Seydoux. As the two gradually bond, their random meeting proves that love is truly blind and motivated by the fear of being alone or metaphorically ‘turned into an animal’ – a spell in an old peoples’ home is possibly the real life analogy Lanthimos is alluding to here. Striking out as a married couple in the city, they discover that life is not as perfect as they imagined it would be. The moral of the story: Be careful what you wish for.  MT