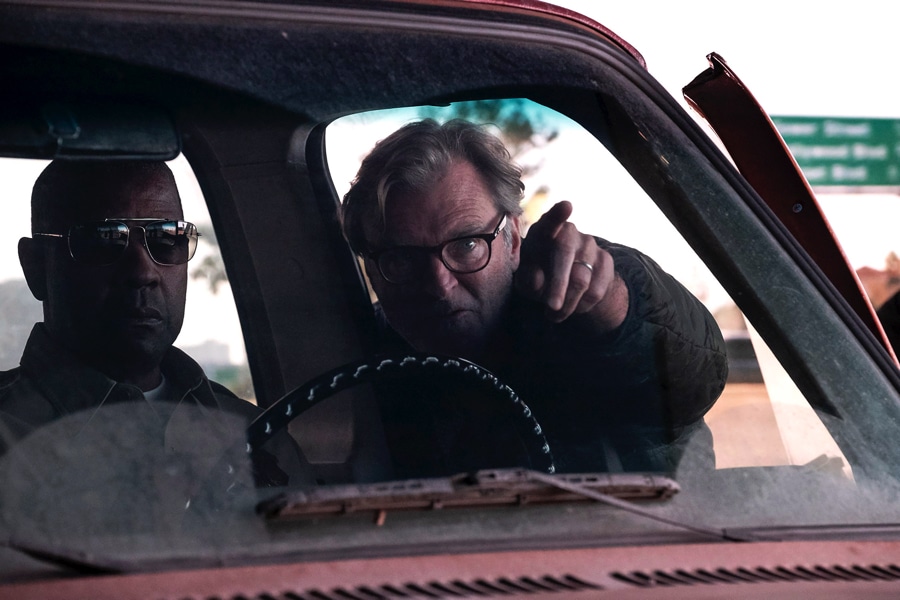 John Lee Hancock proves that casting three Oscar winners isn’t always guaranteed to set the night on fire in his pensive police potboiler that ignites in the final hour.

The Little Things is a workmanlike Neo-Noir thriller that sees Denzel Washington’s Deputy Sheriff Deke Deacon join forces with Rami Malek’s Sargent Jim Baxter to track down a serial killer in a moody retro Los Angeles (the 1990s). And the sultry cinematic scenes are what makes this moody cat and mouse procedural watchable thanks to John Schwartman’s stylish visuals that keep us amused while the action gets going. Chemistry-wise Sargent and Sheriff are a mismatched pair who seem to be in different films that suddenly fuse once catalyst Jared Leto (Albert Sparma) appears as the scary suspect of their investigation.

Jim Baxter is basically an awkward bugger with a long-suffering wife, and troubled by past memories stoked up by the serial killer haunting the streets of downtown LA. And he lets it get to him. Deke has seen it all before and is far too laconic to allow ‘the little things’ to bother him, plodding along placidly before he pounces like a jaguar on his pray. Of the two you’ll be rooting for Deke.

These well-crafted characters feel real and believable but they just don’t gel – or at least that’s the impression given by Hancock’s rather loose script and treatment. Support comes in the shape of Chris Bauer’s genial Detective Sal Rizoli, and a cute little cop played by Natalie Morales.

As the net closes in around Sparma, Baxter’s mental instability gets in the way of the investigation, and Deke puts his foot down, tired of the suspect taking the law for a ride in the confines of the interrogation suite. Photos of the victims are bandied about but there’s no suspense to speak of – this is more a film about the cats than the mice, although Leto creates an unsettling crim with his haunting eyes, Robert Peston style vocal delivery, and a strangely incongruous pot belly.

The Little Things leaves us with too many unanswered questions as it trundles into a rather subdued character study of midlife crisis: Baxter’s coiled anger and petulant navel-gazing and Deke’s avuncular musings. The likeable Deke has no backstory as such but he’s living in a trailer in his run up to retirement, and making tentative advances towards Judith Scott’s calm and confident pathologist (far the most interesting and powerful female character of the piece) who doesn’t encourage him, so no love interest to speak of. What starts as a promise of Noirish excitement eventually finds its way into the crowed annuls of ‘also-rans’ as an everyday story of world-weary perfunctoriness that provides decent entertainment but certainly nothing to challenge your heart rate. I quite liked it. MT