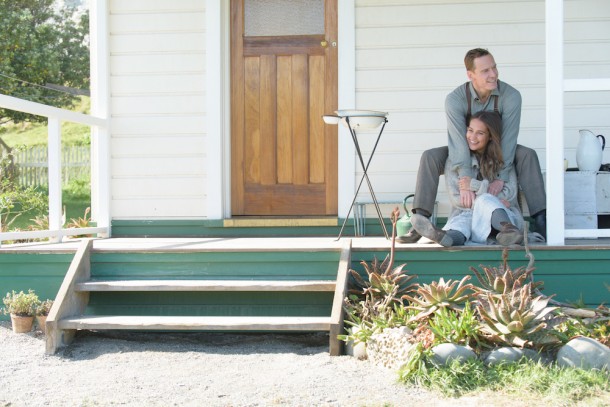 Based on the 2012 novel by M.L. Stedman, director/writer Derek Cianfrance picks up where he had left off with Blue Valentine: a relationship spoilt by circumstances, fate and human fragility. The epic format, rare today, suits the subject well: spanning decades, the emotions are played out in full, leaving the audience exhausted by the end of the sweepingly romantic tragedy.

Tom Sherbourne (Fassbinder), a British soldier in WWI, seeks refuge as a light keeper on an isolated rock called Janus, off the coast in Western Australia. Emotionally and physically spent, he just seeks solitude; the bloodbath in France has opened his eyes to the endless possibilities of human cruelty. Just before he leaves for his post, he falls in love on the mainland with the young and headstrong Isabel Graysmark (Vikander), who later agrees to marry him. The two live – for a time – happily in the wilderness, before two miscarriages drive Isabel into a manifest depression. When Tom rescues a rowing boat, the couple find a dead man, and a baby girl very much alive. Isabel talks the very reluctant Tom into keeping the baby, pretending it was their own and setting in motion untold drama of colossal proportions.

The Light between Oceans is somehow a meeting between Henry James/Thomas Hardy and David Lean. The emotional hurt inflicted on their protagonists by the two authors, match well with Lean’s strong sense for the epic battle in hostile surroundings. The wild, beautiful landscape is the perfect background for this drama of guilt, savage suffering and motherly yearning seen through this visceral human need to procreate. DoP Adam Arkapaw’s magnificent visuals match both the human obsessions in the intense close-ups, and the dramatic remoteness of the environment in panoramic shots. Vikander and Fassbinder, a couple in real life, play their hearts out; Vikander’s strong but elegant poise (she is a trained ballet dancer), is well opposed to Fassbinder’s tortured movement and demeanor. Weisz’ Hannah, in spite of her turmoil, being the detached chess player, setting a trap for Isabel. This might be traditional cinema, but it is emotional and aesthetically powerful, well crafted on all levels, and truly moving thanks to Alexandre Desplat’s operatic score. AS