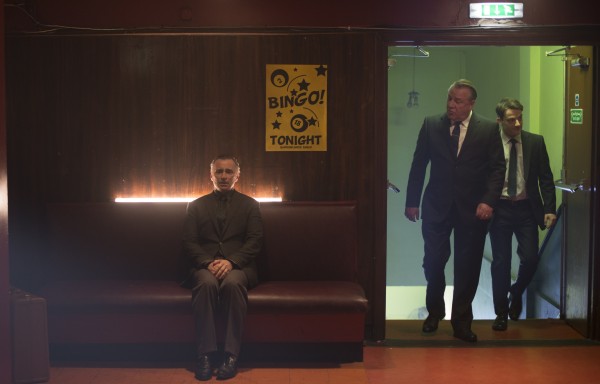 Robert Carlyle plays the lead in his eponymous feature debut, a suitably gruesome urban comedy from the backstreets of Glasgow, where his character is a social misfit with a sideline in accidental murder.

Dark comedies are notoriously hard to handle but Carlyle pulls this off with a certain aplomb although some of the scenes could have done with a little less throttle (particularly the finale). As Barney Thomson, Carlyle cuts hair during the day and at nighttime goes home to his mum Cemolina, a corrosive, cackling, bronze-coiffed Emma Thompson with a permanent fag on the go and a penchant for Bingo. She never wanted Barney – the unfortunate product of a one night stand – and Barney’s snarky, bad-temper reflects this in angry outbursts at Henderson’s Barber Shop where, one day, he is given the sack. But Barney’s not having this, and things turn deadly in the ensuing fracas when his colleague Wullie (Stephen McCole) accidentally gets stabbed to death by Barney’s very own tools of the trade.

Unfortunately for Barney, the local police are conducting an investigation into a string of murders involving young men  whose body parts are being posted to various Scottish outposts. A severed penis arrives in Arbroath; a foot in Pitlochry and so on. Led by a mouthy (as always) Ray Winstone as the blundering Detective Inspector Holdall, the inquiry points a finger at Barney, who is seen loading a bulky object into his Nissan Primera by a curiously be-wiggged weirdo.

Traumatised by his crime, Barney goes into denial mode, hoping his mum will sort things out but the gorgonesque Cemolina (a hilarious Emma Thompson in full abandon) has better things to do such as relaxing on a two day £40 coach trip to the Isles with her bawdy Bingo pals. And the more Barney tries to cover up his wrongdoings the worse it gets.

Carlyle peppers his film with plenty of gritty Glasgow texture: Barrowland looms large along with the famous tenements and tower-blocks and the City’s sandstone landmarks, making this very much a postcard picture of his native Glasgow allbeit a grim and grotesque one. A man with an electronic voice-box is a macabre reminder of the social ills of a city where smoking is the national pastime.

Emma Thompson brightens each scene with her caustic portrayal of a woman of dubious origins who has resorted to a certain low cunning synonymous to make a success of economically challenged past and Barney discovers this to his horror when a well-dressed young man comes knocking at their front door responding to a small ad “from a woman looking for a night of unbridled passion”.  A certain poignancy piques the meltdown melodrama of the scene where Barney discovers his origins from his hard-nosed Mum, and Carlyle is restrained and melancholy in the title role.

The Legend of Barney Thomson is fast-paced, tightly scripted affair adapted by Richard Cowan and Colin McLaren from the series of seven Barney Thomson books by Douglas Lindsay. And very much like the city of Glasgow itself, it’s a cacophony of the good, the bad and the downright ugly. MT