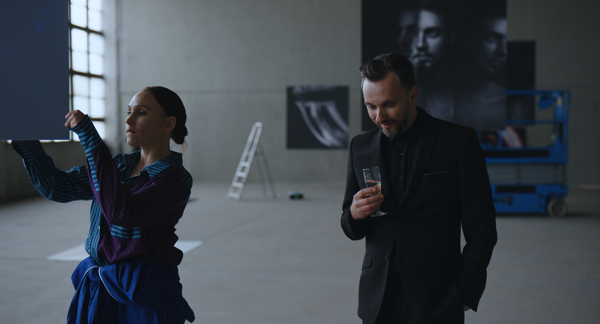 Lithuanian writer/director Romas Zabarauskas paints an affectionate rather wistful portrait of a gay corporate lawyer who has not come out of the closet. Meeting his paramours secretly at night, while fronting up in Neo-capitalist Lithuania by day, he is very much aware of being ostracised in his homophobic homeland if he breaks cover. Zabarauskas (who is openly gay and an activist) hits all the right political notes, his narrative is simply too slight to justify a 90+ minute running time.

Holding court in his luxury apartment surrounded by younger friends, mid-thirties Marius (Kvosciauskas) is resigned to being “an old poofter in this homophobic country of ours”. At work he is glib and condescending towards his receptionist, but when nouveau-riche gallery owner Darya (Ekamasovia) turns up and wants him to take on a defamation case, he is only too willing to indulge her because of her status and bank account. The death of his father brings him up short, the two had a uneasy relationship and the funeral takes him into the countryside for a spot of navel-gazing. On his return Darya hires him for what looks like a tricky divorce, but this thread is totally abandoned when Marius is enraptured by a male model called Ali (Yildiz) he meets on a  Pay-TV channel. But it soon transpires that Ali is a Syrian Asylum seeker living in a refugee camp in Belgrade. The two fall in love, and hatch a daring plan to overcome Ali’s illegal status.

The Lawyer is basically two films in one: the first part deals with Marius and his professional persona, so to speak, dealing with clients and his family; the second is a passionate gay love story. Although this is entirely possible, indeed common, the narrative fails to knit the stories together convincingly. Kvosciauskas is terrific as the corporate whizz-kid, but less authentic as the committed lover, unable to embody the character the director had in mind, and script’s flawed structure doesn’t help.  DoP Narvydas Naujalis captures the transient nature of Belgrade and Vilnius, cities caught between a Soviet stricture and a materialistic present where human realities are best swept under the carpet. AS