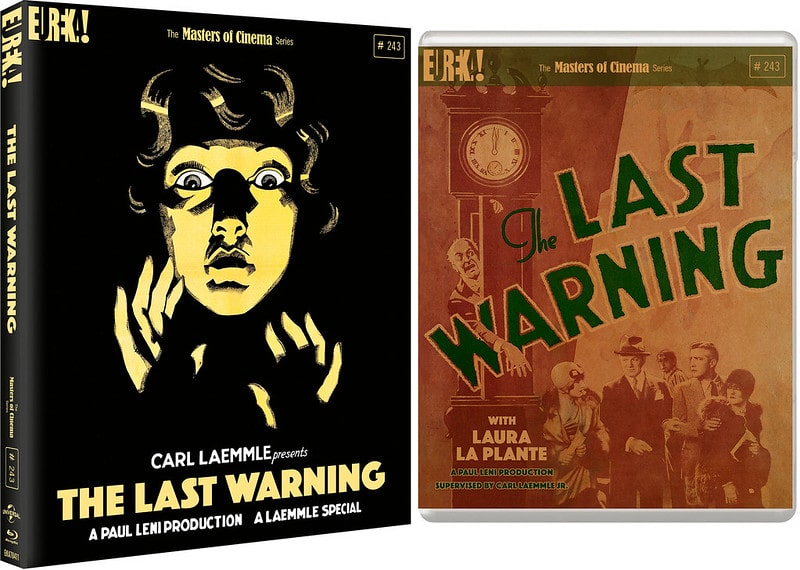 Universal intended The Last Warning as a companion piece to Leni’s more famous (and superior) The Cat and the Canary (1927), and it was also German born director Paul Leni’s final: he died at the age of forty four eight months after the film’s premiere, contracting sepsis from an untreated tooth infection.

Based on the novel by Wordsworth Camp, the Broadway play by Thomas F. Fallon and then adapted for the screen by Alfred A. Cohn, The Last Warning is a mystery-thriller ‘who-done-it’, with a clunky and complicated narrative dominated by Leni’s direction and Hal Mohr’s jerky camerawork. Charles D. Hall’s art direction is inspired by German expressionism, with Leni’s Das Wachsfigurenkabinett/ Waxworks (1924) perhaps his greatest achievement.

Leni made use of the Phantom of the Opera (1925) set for his last outing which begins with one of the actors (Woodford’s D’Arcy Corrigan) being electrocuted on stage. There is rumour Woodford was part of a menage-a-trois, but more confusion occurs when the body disappears without trace. The theatre is closed but five years later producer Mike Brody (Roach) re-opens the place to catch the murderer by staging a re-run of the play with the original cast members.

During the rehearsals falling scenery, a fire and frightening noises occur, and the purse of leading lady Doris (La Plante) is stolen. Stage manager Josia Bunce (McIntosh) receives a telegram,  signed by John Woodford, telling him to abandon the play and this sets the stage, quite literally, for a series of disasters, involving a 400 volt cable electrocution and worse was to come.

After the shooting, some spoken dialogue and audio effects were added, but this version has been lost. We are left with great moments of camera work, such as in a scene where veteran actress Barbara Morgan leaps from the stage and plummets to the ground, with the camera taking on her POV. Whilst Phantom of the Opera would play a great role in future Universal canon of horror features, The Last Warning, with its masked killer, is a prelude to the Italian ‘Gialli’ features of directors Dario Argento and Mario Bava. AS

ON EUREKA MASTERS OF CINEMA 15 FEBRUARY 2021