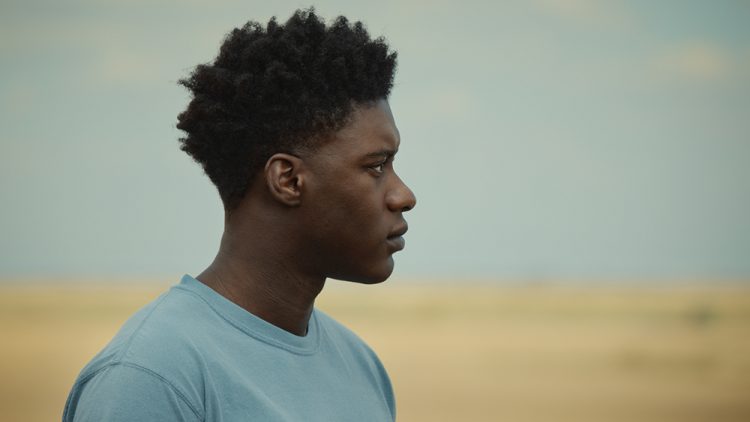 Writer/director Shola Amoo explores a conflicted teenager at odds with his environment in modern Britain, with his roots in Nigeria.

We meet Femi (Tai Golding) as a happy eleven-year old in rural Lincolnshire where he runs wild with his white school friends during the day, before returning to loving foster Mum Mary (Black) in a middle class area. But Femi is suddenly uprooted when his birth mother Yinka (Ikumelo) demands his return to her tiny flat in one of many high-rise blocks in South-London. Femi is stranded: on the phone he calls Mary ‘Nan’, but refuses to admit how much he is alienated by the black ghetto, and his authoritarian Mum. She punishes him physically, telling him “I did not raise you, to be rude”. To which Femi answers “You did not raise me”.

Sixteen-year old Femi (Adewunmi) has nothing but his memories, but he makes up for it by presenting himself as a proud African. Meanwhile, many of his mates are much more assimilated, and bully him. For a short while, he fells under the spell of the local mini-gangster Mace (Ladipo), but an upright teacher helps him to free himself from the clutches of petty crime. A romantic interlude just goes to enforce his alienation. But this all changes in the third act when his mother introduces him to his birth father in Nigeria.  A wealthy Christian, he rejected Yinka and his son because she believed in the old mysticism of the country and “was not ready to submit like a Christian woman.”

The structure of the feature underlines Femi’s conflict. There is only one scene when past and present interact positively and this involves his foster mother Mary. DoP Stil Williams uses a peachy pastel palette for the Lincolnshire scenes, than switches to hyper-realism for the South London interlude, before prime colours show his re-awakening in Nigeria.

THE LAST TREE (the title remains opaque) has not the narrative strength of Sally El Hosaini’s My Brother, the Devil, but relies on emotional power. Femi is black, African and disenfranchised British, but at the same time rejected on all three levels. He is not able to connect his childhood memories with anything in his adult life, and the question remains if he will find acceptance in Nigeria, or if the fragmentation will continue. Amoo’s feature has certainly structural fault lines, but he makes up partly for it with a radical passionate approach, showing a picture of unreconciled loneliness. AS