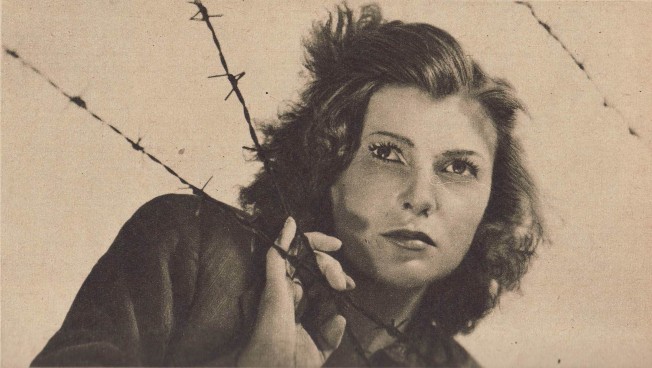 Wanda Jakubowska (1907-1998) and her scriptwriter Gerda Schneider were themselves both inmates of Auschwitz; and Jakubowska’s determination to remember what she was witnessing in order to make a film about it helped keep her alive. In the summer of 1947 she duly returned to Auschwitz to film the exteriors of ‘The Last Stage’, with former inmates among the supporting cast. (The fact that it was shot in summer already sets it apart from most other films set in the camps, which usually find winter more atmospheric). Much of the imagery of later reenactments like ‘Schindler’s List’ – including the famous orchestra – can be found here; while the fact that the events it reenacts were only a couple of years previously gives it an immediacy and visual authenticity no later reenactments could hope to match. (One tends to think of Auschwitz as just a collection of huts, but seeing the real thing in this film you realise how enormous it was).

‘The Last Stage’ is not strictly speaking about The Holocaust, but is more an anti-fascist document of the rape of Poland by its occupiers; and we actually see Polish women protesting at their incarceration and rough treatment on the grounds that they’re not Jewish. Jakubowksa herself was there because of her activity in the resistance, while the onscreen introduction lists the many different nationalities held in Auschwitz. We see Frenchwoman singing the Marseilleise and Russian women dancing to celebrate Stalingrad (although it is sobering to reflect that at this stage liberation will still be two very long years away); and one prominent character is a gypsy.

Jakubowska’s film is organised as an ensemble piece which flits from group to group, the most prominent character being Barbara Drapinska as Martha Weiss, a young Jewish woman whose ability to speak German result in her life being spared (for the time being) to function as an interpreter. The actress who actually heads the cast list is Tatjana Gorecka as Eugenia, a Russian doctor ultimately tortured to death for attempting to tell the truth to members of an international commission who visit the camp to observe the conditions. (The fact that outside observers were allowed into some of the camps, where they were successfully lied to about what was actually going on, remains little known).

The chimneys perpetually belching smoke are frequently remarked upon throughout the film; and although the actual mass extermination programme is not depicted there are harrowing scenes involving the murder of a baby and the withholding of medicine. The cruelty of the guards and the kapos is depicted as a routine matter and the camp administration as unimaginative jobsworths. But Jakubowska is more concerned with making an uplifting socialist tribute to comradeship in adversity than a recitation of Nazi atrocities. Everyone in ‘The Last Stage’ is an individual, even the administrators (who get a surprising amount of screen time). Despite the characters all speaking in their native languages, the cast are all Polish (some of those playing Germans obviously dubbed), and with their handsome Polish faces look far too healthy and well nourished to dispel memories of the damning newsreel footage of starved and broken human beings that shocked the world in 1945. Even Aleksandra Śląska as the camp overseer is ironically much prettier than any of the actual women guards we see in contemporary newsreels.

‘The Last Stage’ could only have been made with Russian approval (Stalin, apparently actually approved the script personally), the excellent photography is by a veteran Russian cameraman, Bentsion Monastyrsky, and the Red Army are portrayed as saviours. Although stills from ‘The Last Stage’ regularly appear in film histories, the film itself (along with the rest of postwar Polish cinema) is little seen today. That Jakubowska remained an ardant communist until the very end of her long life, as well as enthusiastically wedded to socialist realist aesthetics, led to her own work ironically being sidelined as “politically incorrect” in post-communist Poland. RICHARD CHATTEN