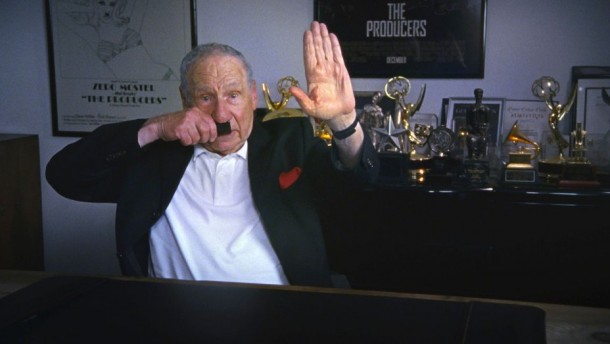 With the help of Mel Brooks, Larry David and Holocaust survivor Renee Firestone, documentarian Ferne Pearlstein explores how humour can come out of taboo topics such as the Holocaust.

THE LAST LAUGH discovers that it’s all down to who is telling the jokes and how much time has elapsed since the tragedies occurred. Comedian Gilbert Gottfried comes up with a neat solution:”tragedy plus time equals comedy”.  So it’s ok to joke about ‘The Spanish Inquisition’ but ‘9/11′ is still understandably out of bounds. Brooks’ 1968 film The Producers was considered an outrage back in the day, but his later 2005 version (directed by Susan Stroman) was given the thumbs up. And jokes can often be cathartic in times of great stress. Concentration camp survivor Firestone claims that humour was the only weapon they all had against the Nazis. Brooks terms this “Revenge by ridicule”.

But despite satirising Hitler even Mel Brooks finds it difficult to joke about the Holocaust. Something that Joan Rivers managed to pull off on The Tonight Show. Apart from The Producers, making fun of the Nazis is almost a sub-genre in Hollywood from Mel Brooks’ The History of the World (1981) to Charlie Chaplin’s The Great Dictator (1940) and Holocaust survivor and comedian Robert Clary talks about appearing in the TV series Hogan’s Heroes with reference to his young days entertaining in the camps.

Yet Brooks decries Life Is Beautiful, as being the ‘worst film every made” so humour doesn’t always work Holocaust wise. The rule of thumb when lampooning any tragedy seems to be ‘stick with the turf”. Roughly translated this means : Jews can joke about Jewish tragedies such as the Holocaust, and Black people can send up slavery; but neither should cross either other’s boundaries, which somehow makes sense.

THE LAST LAUGH slightly loses its way in the last half hour when it broadens the debate and but it’s watchable and entertaining for the most part. MT