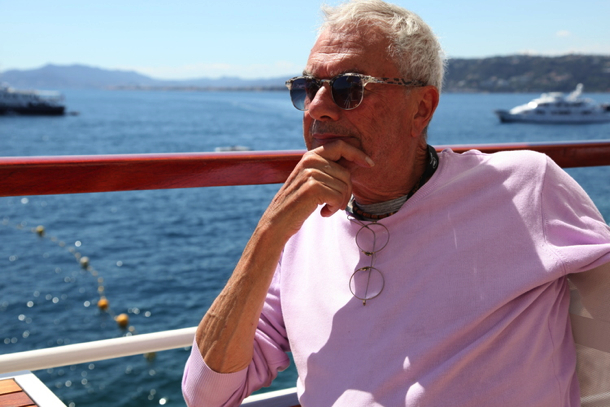 For a person who has had a significant impact on UK theatre, little is known about the producer Michael White. Born in 1936 in Glasgow, he went to boarding school in Switzerland from the age of seven due to suffering from asthma. After studying  at the Sorbonne, he worked as a Wall Street runner in New York, before becoming Sir Peter Daubeny’s assistant at the World Theatre in London. At the age of 24, White produced his first West End play “The Connection” by Jack Gelber, first produced by the “Living Theatre” in the USA. Centred round drugs and their use by jazz musicians, it brought White, not for the first time, into dispute with the Lord Chamberlain, who was the official censor for all theatre productions in the UK from 1737 until 1968.

His greatest hits transformed, usually accompanied by scandals, not only the London stage: “Oh! Calcutta!” (1970), “The Rocky Horror Picture Show” (1973”) and “Chorus Line” (1976) were performed successfully at New York’s Broadway. He later introduced Pina Bausch and John Cage, true revolutionaries in their fields, to the London audience. When he turned to film production in 1974, he again created a sensation with ”Monty Python and the Holy Grail”, and the second Python production “Jabberwocky” (1977). In the USA he produced Louis Malle’s “My Dinner with Andre”(1981); in the same year he produced John Waters’ “Polyester”, before returning home for the first episodes of the TV series “The Comic Strip presents” a year later. Rather more serious were “Heat and Dust” (James Ivory, 1983) and “The Ploughman’s Lunch” (Richard Eyre, 1983); followed by “Eat the Rich” (Peter Richardson,1987). Perhaps his most important production for the screen was “White Mischief” directed by Michael Radford in the same year.
We meet Michael White for the first time at the Cannes Film Festival in 2010, were the director interviews the producer, suffering from speech and walking impairments after multiple strokes. Otto follows him to London, to unravel his long career, whilst White collects his memorabilia, to be auctioned off at Sotherby’s. Because in spite of all his great successes, White is broke – and it is not only his fault. Fox’ film version of “The Rocky Horror Picture” cost $1.4m, making a cool profit of £150m – but White had been more or less tricked out of his percentage. In the later years of his career, the “gambler” White (he still bets heavily on horses), with the profit margin getting narrower and narrower, did not put his money into mainstream musicals, but remained faithful to risky investments.

In Gracie Otto’s watchable debut biopic John Cleese, Greta Sacchi, John Waters and many others testify to White’s generosity, but also to his lifestyle, which always featured drugs and young women. Naomi Watts states that women loved him not because of his money, but because he liked them and he always wanted to stay young. And this seems to be the verdict most (including White himself) agree on: he is the eternal teenager, who did not want to grow up. He is the life and soul of the party at Cannes each year, partying every night.

Comparable in some ways to Mike Myers portrait of Shep Gordon in Supermensch, Otto fails to get behind White’s façade: she is not insistent enough, and lets the producer get away with little inter-titles, in which he dresses up banalities behind witticism. Whilst the amount of the material is staggering, Otto is neither analytic or probing enough, to show more about White than he allows her. The camera is sensitive, showing White in all his frailness, but always with great respect. AS

OUT ON GENERAL RELEASE FROM 26 SEPTEMBER 2014