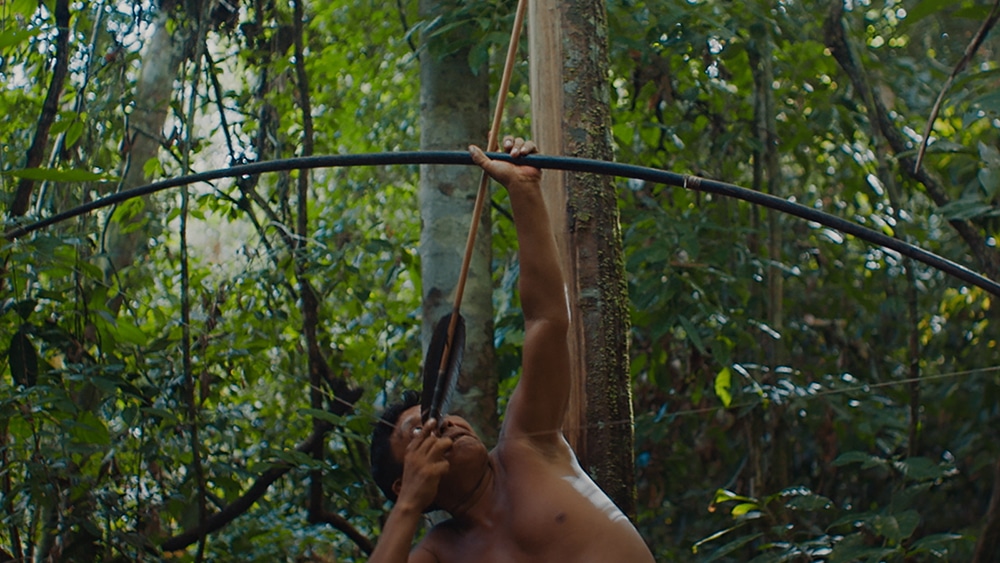 The Yanomami tribe have lived in the Brazilian Rain Forest for over a 1000 years. Survival is the focus of this indigenous tribe, who are extremely smart, despite their primitive way of life. In his ravishing docudrama Luiz Bolognesi dives deep into the jungle on the borders of Venezuela and Brazil to uncover their story.

Bolognesi has already filmed the Yanomami back in 2018 gaining the trust of a group with the help of their Shaman and elder Davi Kopeneva Yanomami, who reveals the history of a tribe whose existence predates Brazil as a nation, by 500 years. But there is a new strand to their struggle. Since taking power in 2019, right-winger Jair Bolsonaro has sanctioned continuing deforestation of the Amazon encouraging gold prospectors who dig up the land occupied by the Yanomami, polluting the waters with Mercury and bringing disease, including Covid-19, into the community.

Above all this is a film to watch and marvel at, its enchanting images show an atavistic tribe unalloyed by the march of time, both men and women contributing to their daily subsistence by hunting with bows and arrow and poisoned darts. But there is an important message in Bolognesi’s narrative, and that’s the real thrust of his film.

Legend has it that there were two brothers, Omama and Yoasi who purportedly dug up the forest ground creating rivers and lakes. But the bothers were lonely and longed for women. Then Omama met the water goddess Thuëyoma, who came out of the river to join him, later admitting she had also slept with Yoasi who had treated her badly. Omama found his brother, rubbing his miss-shaped penis against a rock and banned him from the land to the other side of the ocean. “You are not my brother any more”. And Yoasi went away for good, and created death. Yoasi became the spirit of evil, whilst Omama buried the gold deep into the earth, so that Yoasi’s spirit could not be awoken to bring back the smoke of disease, which made us mortal.

Davi has lived with the ‘white men’, but he was lonely, and their ‘products’ put a spell on him. Making use of modern technology, he looks out of place making a phone-call, but this is all for the good of the tribe to organise resistance against the gold prospectors who have already made their negative presence known: In 1986 over 45000 gold prospectors forced the Yanomami deeper into the rain forest, killing between 1500-1800 natives. Six years later, despite of a change in the law granting this territory to the Yanorami. During the infamous Haxima massacre sixteen people lost their lives at the hands of the ‘white people’.Meanwhile back in the village, one woman mourns the loss of her husband: she believes the water goddess has taken him into the river with her, and begs the Shaman to help retrieve her husband.

Despite their primitive credentials the women here are very enterprising and have formed a co-operative to improve production of baskets which they can barter for food from the men, making them less reliant. Davi too is highly intelligent, demonstrating nous and a grasp of capitalism: “Gold prospectors dream a lot, but only about money. But it is the business men who keep the money, the ones who come here, the workers stay poor. It is all about greed”. He also remembers the plight of his relatives’ further north, whose water was poisoned with mercury.

The Yanomami are savvy and sociable people. DoP Pedro Márquez, who also photographed Ex-Shaman (2018), talks of their willingness to facilitate the making of the film, but ensuring they never looked into the  camera, believing it would steal their souls. The filmmakers’ hope is that they can persuade investors who work with the Bolsanaro administration, upholding the 1986 law so that the Yanomami can return to their way of life. AS