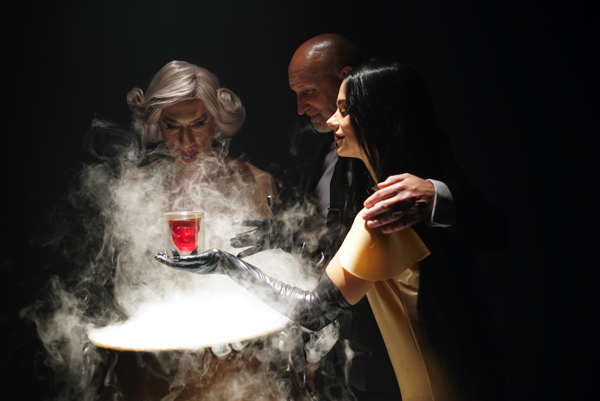 Philipp Humm came to filmmaking from a background at Amazon, Deutsche Telecom and T-Mobile USA. He got together with DoP Dominik Wieschermann and the result is this stylish and stagey but flawed imagining of Goethe’s Faust One and Two.

It took Johann Wolfgang von Goethe 60 years to finish his tragic magnum opus -the original stage play can run for anything between 14 and 21 hours. Here the  filmmakers have distilled it into a 107 minute film transposing the 500-year old allegorical tale of Faust’s pact with the Devil to Silicon Valley in the year 2059. Humanity is on the brink of extinction as Artificial Intelligence (AI) heralds a new dawn of technological superiority.

Faust One is straightforward, God betting Mephistopheles (Glyn Dilley) that he cannot tempt Dr. Faust (Martin Hancock) to do evil. But after seducing young Gretchen (Yvonne Mai), the good Doctor is drunk on power. So for the second part, Humm introduces Dr. Goodfellow (Berkoff), a Tech wizard who is Dr. Faust’s successor, and probably the last one.

It all begins with a Star Wars- like exposition (minus scrolling text) which explains that an artificial neural network is taking over and will overpower humankind sooner than later. Dr. Goodfellow is in the only safe place not connected to his vast network: his mother’s home, where he tells the Superhuman machine robot AI Paris the original Faust story.

Somehow the story gets lost under all this ballast, and even the Weinstein parallel can’t save it. You can see what Humm has in mind with his reductionist action and poetic interludes, but it comes adrift with Dr. Goodfellow’s narration of the storyline. The play-in-play structure is another inspired departure – with Humm using Faust dressed as Steve Job – but overall these individual strokes of brilliance diminish the strength of the endeavour as a whole, and we are left high and dry by the Sorcerer’s apprentices Humm and Wieschermann. AS