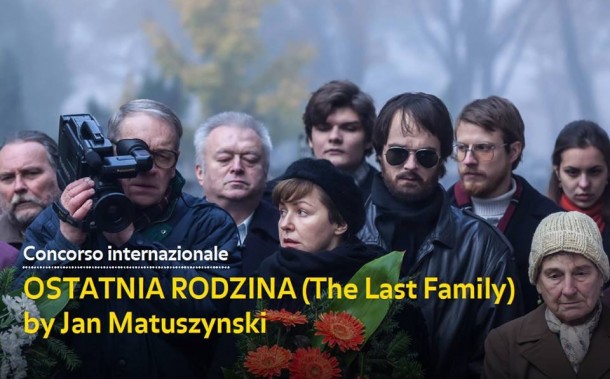 The debut feature of 32 year-old Polish director Jan P. Matuszynski is an emotionally harrowing and visually stunning tour-de-force, capturing the latter part of the life of the Polish post-surrealist painter Zdzislaw Beksinski (1929-2005). Brilliantly executed in details, in common with many biopics, it suffers from occasionally lacking cohesion in so far as that the scenes, however impressive,  do not always hang together as a whole.

The most important aspect of The Last Family is the part we never get to see: Beksinski Senior actually painting (even though the flat is filled with his finished works). His art is hardly referred to, and during the lengthy episode of his life that forms the focus of this study, from 1977 to 2005, none of the Poland’s political changes are mentioned or in any way manifest themselves in the life of the family. Instead we are immediately thrown in at the deep-end: in 2005 the painter recalls disturbing phantasies in an interview, concerning a virtual reality in which he wants to have S/M games with Alicia Silverstone (artificially made taller by three inches). The narrative then flips back back to 1977 when the Beksinki parents Zdzislaw (Seweryn) and Zofia (Konieczna) take their son Tomasz (Ogrodnik) to his new flat, which is in a high-rise block opposite their own. It soon becomes clear that Tomasz keeps his parents busy: whilst professionally adapt – he is a club- and radio DJ, as well as a translator from English into Polish – his emotional growth seems to stunted, he permanently self-pities himself, relying on his parents for any domestic arrangements, and seems to be unable to love anybody but himself. He also seems unable to perform sexually, which is graphically displayed in a scene with his girl-friend Patrycja (Karluk).

His father, who obsessively tapes and videos his family, seems, in contrast, very placid and good-natured, even though, looking at his paintings we may doubt his inner peace. The family is held together by Zofia, who cares for the two men, in addition to the paternal and maternal grandmothers, both called Stanislawa. The only outside interloper is ex-pat Piotr Dmochowski (Chyra), who visits the painter from Paris, trying to sell his paintings in France. He is later banished on account of his unauthorised biography of the family, but after Zofia’s death, Zdzislaw allows him back into his life. After trying in vain to kill himself for twenty-three year, Tomasz succeeds finally at the end of millennium: his father, sitting beside his body, sarcastically congratulates his son. In a violent finale the painter becomes the victim of a young man, reminding us very much of Kieslowski’s A short film about Killing.

DoP Kacper Fertacz camera pictures the Beksinski’s through a peephole: giving us an intimate and voyeuristic view of proceedings. Tomasz’ place is shown the same claustrophobic way. Writer Robert Bolesto, basing his script on the painter’s recordings and diaries, surprises us with some unusual ideas: there is a scene where Tomasz is telling the inflight stewardess that his numerologist told him the plane would crash, but he would survive – which is shown to be true. The leading trio is brilliant, particularly Konieczna, whose Zofia is always keeping the balance of the family life and Andrzej Seweryn went on to win Best Actor at Locarno Film Festival 2016. The choice of music – among others Schnittke and Mahler at the finale – rounds up this apocalyptic and traumatic experience. AS