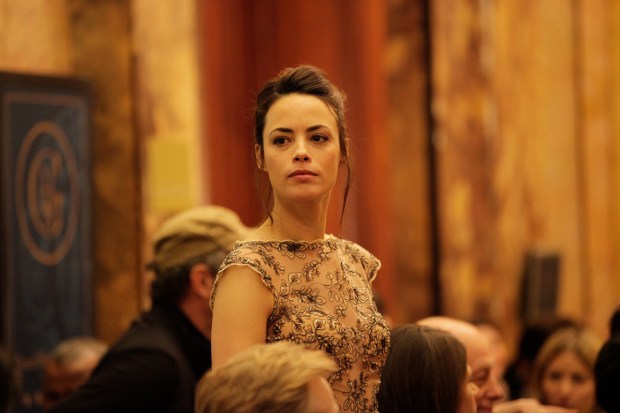 Place Vendôme (1998) was the last memorable Antwerp-set diamond-themed heist thriller – it starred Catherine Deneuve as the wife of a wealthy dealer, played by Jean Pierre Bacri. Eric Barbier updates the genre with this slick and shiny vehicle starring Bérénice Bejo (The Artist) as another glamorous business woman; in control of the world’s most famous diamond.

THE LAST DIAMOND (Le Dernier Diamant), has been hiding its light from UK audiences since its release last year and is now making a sparkling appearance courtesy of Frank Mannion’s distribution company Swipe Films. Yvan Attal (The Serpent) and Bérénice Bejo (The Artist), make for a pleasing pairing in the classically crafted crime caper which provides solid entertainment right up to its final dénouement and is best described as a Gallic Thomas Crown Affair.

While on parole from prison, suave professional safecracker, Simon (Attal) gets dragged into a spot of extracurricular crime with his sidekick Albert (Jean-Francois Stevenin). His goal is the theft of the famous Florentine diamond – purported to be worth €40 million (the real gem disappeared during the Second World War) – he uses his sophisticated charms gain the trust of the wealthy young heiress Julia (Bejo), who has put the diamond up for auction, following  the mysterious death of her mother.

Barbier’s first two acts revolve around well-laid preparations for the heist, as the lead couple’s on screen chemistry builds to a sizzling climax, convincingly creating a subtley nuanced romantic sideshow to the crime caper, as Julia falls for Simon’s cunning dexterity in finding his way first into her boudoir and then into her heart. Meanwhile, the robbery takes place just as Julia is discovering Simon’s duplicity while the plotline twists into unexpected territory providing some tense final scenes. There’s nothing particularly new or daring about THE LAST DIAMOND: what ultimately carries it all along is the piquant romance between Julia and Simon, who, against his better judgement, steadily finds himself involved in a love affair he didn’t quite bargain for. Attal is spectacular as the sociopathic swindler, blending boyish vulnerability with bouts of brutal violence, his cigarette ‘schtick’ adding a certain loucheness to his urbane swagger – Attal is somewhat maligned as an actor despite his excellent chops; (as seen in Leaving, Rapt and Regrets and The Serpent)  and he carries the film here providing sterling entertainment but never over-playing his touch, even when things go awry. Off-screen he’s also captured the heart of Charlotte Gainsbourg.

Cinematographer Denis Rouden’s classy visuals take us on a joyride through the Benelux countries with a sophisticated spin round Antwerp’s upmarket diamond district, thrumming to Renaud Barbier’s upbeat original score. This is a punchy thriller with plenty of heart and soul despite the glib twinkle in its eye. MT

OUT ON RELEASE at SELECTED CINEMAS FROM 29 January 2016.