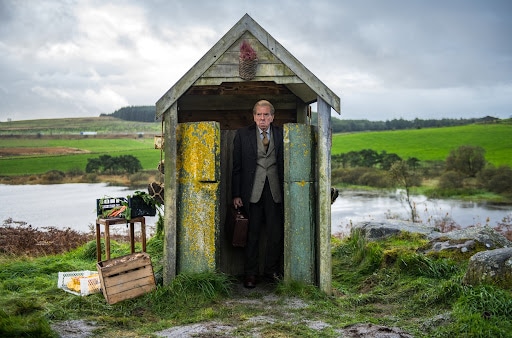 The Last Bus is something between a feel-good-movie and an elegy on death in modern Britain seen through rose-tinted specs. Carried by the great Timothy Spall, it somehow lacks enough information on the character he plays, eighty-something Tom Harper, who is taking his wife Mary’s ashes all the way from John O’Groats to Lands End, making the 838-mile journey on public transport thanks to his bus pass.

After Mary’s death Tom’s reverse journey is a nod to the past, with flashbacks of their married life together as a young couple (Natalie Mitson/Ben Ewing) when they first made the trip, through to the present day. Undeterred by terminal cancer, Tom still firing on most of his cylinders: helping when the bus breaks down and rooting for a racially abused fellow passenger. As the bus travels southwards we’ll get to know more about Tom’s trails and tribulations finishing on a high note on his arrival in Lands End

The contrast between the early 1950s and today Britain seems more positive than realistic: the good old days reflect the happiness of Tom’s married bliss with Mary, nothing seemingly dimming their nirvana, even 70 years later. The goodwill shown by nearly everyone towards the pensioner seems idealist given what most older people have to put up with. Nostalgia rules visual and tonally, the characters reflecting this bland idealism in their conventional rather make-believe lives. A touch of irony would have been welcome to take the edge off the sweetness, Spall breathing life into a chocolate box existence. AS