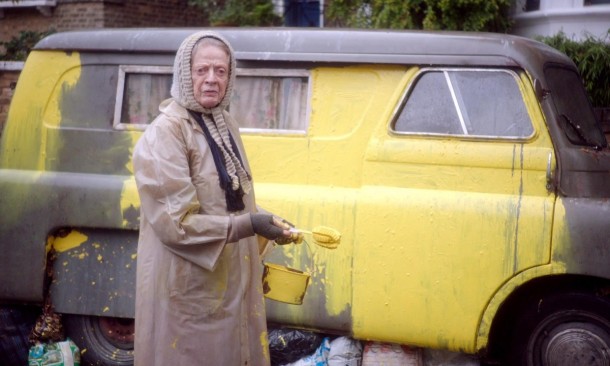 Nicholas Hytner (The Madness of King George) directs the film version of Alan Bennett’s play, which he staged at the National Theatre. Maggie reprises her title role of the bag lady who lived in her battered van in Bennett’s drive way in Gloucester Crescent, Camden for fifteen years.

Miss Shepherd moved with her van into Bennett’s driveway in NW1 during 1974 and stayed there until her death in 1989. Only then did Bennett find out that M.T. Shepherd was once a concert pianist, having been taught by Alfred Cortot, whose extreme right-wing political leanings she shared. Her relationship with Bennett (Jennings) – played by two Alan’s, the writer and his alter Ego the man, who discuss and argue permanently – is one of strife and confrontations, mainly about her hygiene. On occasions she used Bennett’s toilet, and we see the writer cleaning endlessly after her. The neighbours “liberals, slightly guilty intellectuals”, among them Frances de La Tour’s Ursula Vaughn Williams, are glad that Shepherd has landed on Bennett’s property: the main reason being that she did not like the music of the children in the house she had used as parking space before. Shepherd once killed a young man on a motorcycle, whilst driving her car, and even though the accident was caused by the victim, it traumatised the woman , whose mental frailness had been increased during a stay in a nunnery.

The second “woman” in Bennett’s life is his mother, who drifts into Alzheimer’s, ironically after telling his son that Ms Shepherd will need to go to a home. Bennett’s relationship with his mother is, like with nearly everyone (including his alter Ego): full of guilt and regret. Whilst Maggie Smith is only too happy to have confrontations with everyone crossing her path, Bennett muses and reflects about his place in life, all his relationships troubled by inertia. There could not have been a more different ‘couple’ sharing a property: the shy, left wing writer and the load mouthed right-winger, who once wrote “to someone in charge of Argentina” that she was the real “Iron Lady”, and not Margaret Thatcher.

Even though the film travels outside London, when Bennett visits his mother in a care home in Weston-Super-Mere, or talks to Ms Shepherd’s brother, most of it feels like a play, the scenes shot at the original places. This makes THE LADY IN THE VAN into a reflection about art and life: how easy it is to slip once too often and loose the balance needed to cope with everyday life.

Maggie Smith is brilliant, always able to liven proceedings up, and showing a spirit – in spite of her mental illness – that is much stronger than Bennett’s careful life hidden behind words. Jennings ‘two Bennetts’ do need each other, to make a whole, which can survive. Hytner has re-created a London, which has long gone, its weird gentleness replaced by crass materialism and property speculation. LADY IN THE VAN is a sad goodbye to an era which allowed opposing personalities, how ever damaged, to live together. AS

NOW ON GENERAL RELEASE FROM 13 NOVEMBER 2015