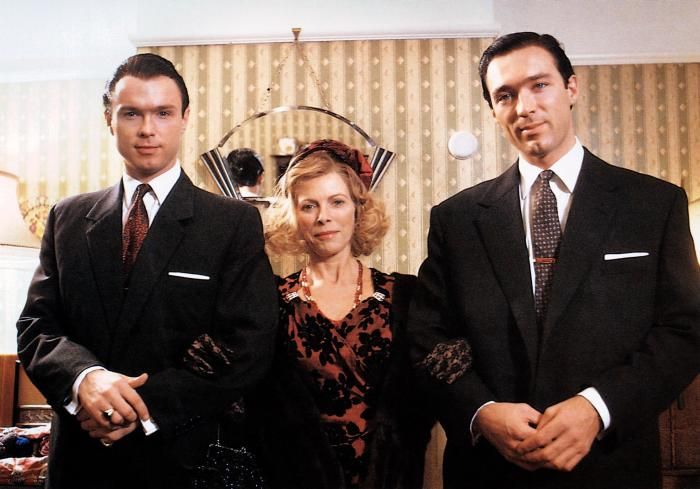 Peter Medak’s thrilling drama about the Kray twins rattles with wartime angst – there’s an evocative scene in the underground the sound of bombs thundering overhead. The Krays (1933-95/2000) were a product of that stoical generation weaned on rations by a mother as tough as old boots who fought tooth and nail for them – here played by the indomitable Billie Whitelaw in a rather painterly portrayal of the legendary story. That said there’s some brutal violence, and plenty of scarlet bloodshed mostly involving swords.

Although we think of the Ronnie and Reggie Kray as 1960s mobsters it was all over for them by 1968 (they spent the rest of their lives in confinement). Their story really started in in the 1930s where we see them as nasty little boys growing up in the grimy backstreets of Haggerston well before they became the instigators of organised East End crime.

Their’s was not a pleasant household – and the family milieu seems to dominate here, their mother Violet threatening to slit their father’s throat in one of the more feisty scenes, the boys defending their mum against an emasculated father, their consumptive aunt Rose (Fleetwood) hovering in the background with her horror stories of being left at home while the men were being ‘heroes’ on the front.

The twins rise to glory in seen in sedate night clubs and fairground settings where their heyday played out against swing bands, Matt Munro and early Beatles. The deft touchstones of Philip Ridley’s textured script are school life, army service, mob and murder. There’s a sensitive turn from Kate Hardie as Reggie’s put-upon wife Frances. Martin and Gary Kemp are more psychopathic than thuggish as the sleek, twinkly-eyed twins – Medak brushed up against them in the East End while shooting another movie and felt the full force of their power. There’s an iconic turn from Tom Bell as Jack ‘the Hat’ McVitie, and where would we be without the snarling Steven Berkoff as George Cornell. And Jimmy Jewel as the grandad. The action is more glamorous than dark and dastardly but, as I said, this is more of a family drama. A social document of backstreet London in the aftermath to the Second World War. MT