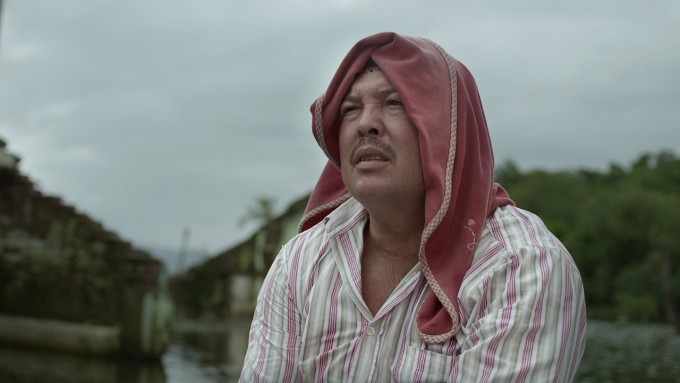 The opening moments of KINGS OF NOWHERE—screening in the documentary competition at Warsaw Film Festival, and the first feature-length doc by 25-year-old Betzabé García—boast an intriguing twist. Though a low-angle shot of a man navigating an empty rundown neighbourhood is a decidedly familiar image, we infer from the way his body moves—or rather, doesn’t move—that he can’t be walking; in fact, as we quickly learn, these streets are flooded, and our subject is steering his way around them on a small boat. Allowing her camera to linger, García focus-pulls, so that the figure becomes blurred and the dilapidated dwellings behind him are sharpened. Here, landscape is as important a concern as any human character.

As shooting locations go, García’s is already halfway to being a readymade film set. In 2006, San Marcos—a virtual ghost town in the coastal state of Sinaloa, northwest Mexico—was flooded, with its population displaced and resettled following the construction of the much-opposed gigantic Picachos Dam, which began in 2006. Formerly host to 300 families, the town is inhabited today by less than ten people, whose daily lives—as García’s film shows—are lived out with a mixture of boredom, resilience, stubbornness, and outright fear of the armed gangs that frequently raid it.

Not that any of this is immediately clear. García is, on this evidence, one of those documentarians who prefers context to gradually emerge from a picture rather than being its framing device. In line with a great lineage of observational documentary makers, her strategy is to simply spend time with her subjects—though of course it’s never a matter of ‘simply’ doing anything when it comes to non-fiction. Indeed, the trick in storytelling terms is to carve one single narrative out of a swamp of material so that it can be a digestible entity which fulfils our received notions of character, setting, dramatic stakes and so on.

Winner of an audience award when it screened at SXSW in March, KINGS OF NOWHERE is a dispatch rather than a polemic. It reserves any on-screen text for a context-lending footnote, revealing the town’s population figures, and some information about Atílano Román Tirado, the radio journalist and leader of the Displaced Persons of Picachos—an activist group seeking compensation on behalf of 800 families in the region—who was murdered last year during a live broadcast. This last explanation gives retroactive gravity to those earlier scenes in which two couples—farmers Jaime and Yoya, and tortilleria owners Pani and Paula—have their porch get-together interrupted one evening by what sounds like distant gunshots. “Fireworks,” one of them remarks, though another can’t help but look over her shoulder into the dark. There’s a menace never far away from this post-apocalyptic locale.

Outside of Venice, the image of someone steering a boat through a half-submerged town is as surreal as something from a 1970s Herzog film. Due to the water that pervades them, the abandoned, eerily mirror-like streets of this rural colonial outpost reflect the skies above—and moments in which the camera floats, boat-bound and onward, sustaining its ineluctable modality without vertical bobs or jerky pans, are not unlike those tranquil river treks in AGUIRRE, WRATH OF GOD. Just like in that film, the key element in KINGS OF NOWHERE—for all the beautiful compositions containing streetlamps, overhead electricity cables and other markers of a civilisation now lost— might be its rich, evocative soundscape. Devoid of people, the town is enlivened by the sounds of lapping water, wood pigeons and the odd crash of thunder—all of which are cloaked by a gentle cacophony comprising cicadas, crickets, cows and cockerels. Here, animals mourn on humanity’s behalf. MICHAEL PATTISON