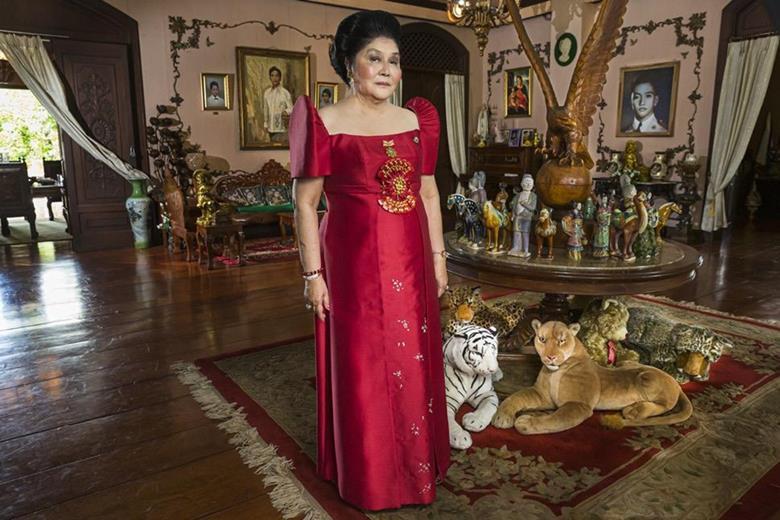 Known for her legendary appetite for shoes – 3000 pairs at one point – Imelda Marcos certainly uses them to ride roughshod over her own people. Lauren Greenfield reveals her steps to power in this eye-popping biopic exposing the gilded lifestyle of the politician and one time First Lady of the Philippines.

The Kingmaker is the latest of Greenfield’s studies of entitlement that began with The Queen Of Versailles and Generation Wealth. Clearly Marcos is a character with delusional as well as narcissistic traits, capable of styling her own persona to serve a flexible narrative. Greenfield goes back to basics to examine how this entitled 90 year old antiheroine and her husband Ferdinand first robbed their nation of its riches, and now are now shamelessly re-tracing their steps to come back to power.

Marcos takes centre stage showing us round her opulently vulgar apartment, showcasing her wealth. We learn how she quickly bagged Ferdinand using him as a vehicle to step into power as the backseat driver of a regime that instigated martial law. Now in the driving seat herself, since his death, she is busily working on her son’s path to the vice-presidency, the next step will be clear.

Condescending and manipulative she is also prides herself of her fake largesse: handing out “candy for the kids” in the shape of gifts for charities and the poor. But this cuts both ways,  barely compensating for the misery she and her husband have doled out in spades. Meanwhile the Philippines is still languishing in the third world with Rodrigo Détente waiting in the wings to be president. The Kingmaker is a detached but delicious dive into the mind of a modern day machiavellian, delivered with sleek aplomb by a filmmaker at the top of her game. MT