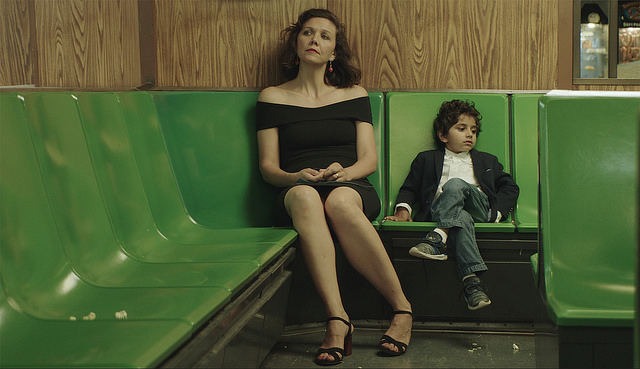 Adapted from Nadav Lapid’s script of his French/Israeli feature of the same name (Haganenet), this is no Hollywood re-make – in fact, it was Lapid who approached the producers. By a stroke of luck, Maggie Gyllenhall (who also produced) was cast in the lead, and the result is a fascinating character study, full of ambivalence and obsessive longings.

Lisa Spinelli, having just turned forty, feels unfulfilled on many levels. Travelling to work every day on the ferry between Staten Island and Manhattan, she looks forlorn and lost in her daydreams. Husband Grant (Chernus) is a bear of man, but lazy of body and mind. Her teenage children Laine (Tahan) and Josh (Jules) are an obvious disappointment to Lisa: Laine is just interested in the latest fads, and thinks her mother’s a dinosaur. Josh is even worse, and is giving up school to join the US-Army. To counter all this, Lisa has joined a poetry group – but alas, her talents are limited, and teacher Simon (Bernal) expresses his doubts politely. Enter five-year old Jimmy (Sewak), one of Lisa’s pupils, who suddenly spouts lines of poetry, which are well beyond his tender age. Lisa is thrilled, asking Jimmy to phone her, whenever a poem is ready, and the little boy responds eagerly. And it’s not difficult to understand why: he is neglected by his divorced father Nick (Naidu) who runs a shady nightclub, and his lackadaisical  babysitter Becca (Salazar), who got the job because she gets laid by his father.

In her poetry class, Lisa passes off Jimmy’s work is her own, which leads to a quick romp with Simon (Bernal), who is suitably impressed. To get more access to Jimmy, Lisa tells Nick that Becca is often late for picking-up time, and Nick fires her, only too happy that Lisa is volunteering to look after Jimmy until he fetches him in the evening. But Nick also makes it clear he expects his son to excel in sports and business, rather than try to pursue an artistic career, like his impoverished relatives. Then everything slowly unravels towards a tense finale.

Colangelo traces Lisa’s growing obsession step by step. Creativity is her only way of escape, but it’s hard for her to realise that she is dilettante –  as Simon puts it blandly. She channels all her yearnings into Jimmy, in an effort to save both him and herself. Family and society, dominated by social media, are a great disappointment to her, and Jimmy’s father Nick, is just another materialist ignoramus. Throwing all her past life away, she has to save Jimmy from the same fate that has destroyed her. She ignores her responsibilities as a teacher (and as a human being) and becomes obsessed with Jimmy being a prodigy. Lisa, who has been so gentle and rational all her life, suddenly sees Jimmy as an embodiment of herself – and is determined that he won’t suffer the same fate as she has.

DoP Pepe Avila del Pino pictures Lisa’ descent with his subtle camerawork. The rides on the ferry are a study in melancholy, and her classroom is a real work of art, light and shadows creating a nuanced moodiness. But this is Maggie Gyllenhall’s feature: she never puts a foot wrong, going seemingly unobtrusively forward from an ideology of art as a saviour, to a a full blown psychosis. Colangelo supports her aptly, particularly with a great solution at the ending: she never denounces Lisa or the relationship between her and Jimmy, which somehow survives. Kindergarten Teacher is not perfect, but portrays a specific ambiguity which is as endearing as it is dangerous. AS

ON RELEASE NATIONWIDE from 8 MARCH 2019