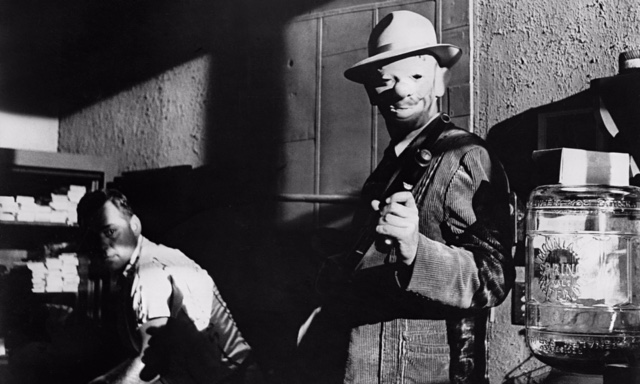 Kubrick had started his career in the late 1940s as a magazine photographer honing his framing expertise and camera techniques. At 27, THE KILLING was his third feature and another chance to demonstrate his photgraphic skills for this exacting genre. He based his fractured narrative on Lionel White’s book ‘Clean Break’ and called on paperback pro Jim Thompson (The Killer Inside Me) to help him co-write the script with a documentary style employing a voiceover narration (from veteran commentator, Art Gilmore) to create distance. During the robbery sequence, the action shifts back and forth showing the event from the different perspectives of the perpetrators.

Following on from Killer’s Kiss it was technically his first full feature-length film; the former running for just over a an hour and opens on the New York’s Bays Meadows racetrack as a group of hardened criminals prepare to stage a horserace heist. Sterling Hayden leads as the ringleader Johnny Clay, a glibly handsome and fast-talking pugnacious crook, fresh out of jail.  Elisha Cook Jr’s shifty racetrack bookmaker plays his sidekick George Peatty who’s slightly back-footed by his wife Sherry’s ongoing infidelity. Using his forthcoming windfall as a bribe to win back her affections, he divulges too much about the robbery and Sherry tells her lover who tries to grab a share of the action.

The tone is dark and menacing and pacing echoes that of Wilder’s Double Indemnity ten years previously; communicating the urgency, greed and depravity of all concerned and reflecting the country’s nascent economic doom. This richly textured noir thriller contains a scene in local chess lounge (Kubrick loved the game) where Johnny meets the Russian wrestler Maurice Oboukhoff (Kola Kwariani) who is instrumental in the heist and there is a clever turn from cult actor Timothy Carey as the “paraplegic” man who fires the shot on the racecourse. The clown-like robbers’ masks will appear again later in Clockwork Orange adding a note of cognitive dissonance to the thriller tropes. Kubrick has planned the action in his mind and gradually gives the clues away while the tension tightens until the nail-biting airport climax, which every traveller can appreciate. MT

NOW AVAILABLE ON BLU-RAY COURTESY OF ARROW FILM AND VIDEO