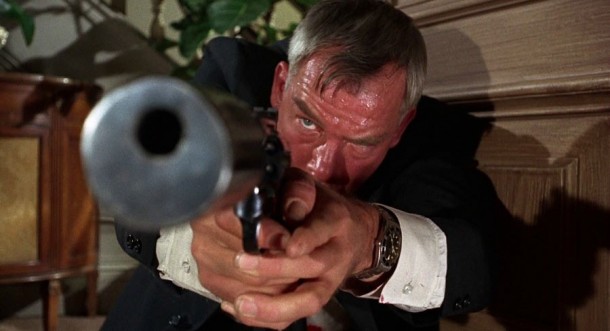 Don Siegel’s remake of Robert Siodmak’s 1946 Noir thriller was more brutal, brash and vivid – reflecting the glibber, modern world of the sixties. In the opening scene John Cassavetes is shot down in a hail of bullets by Lee Marvin and Clu Gulager’s vicious hitmen in a school for the blind; a clever move involving a load of witnesses all oblivious to the perps.

The tone grows mellow and flirty once Angie Dickenson appears on screen as the raunchily romantic love interest of the luckless antihero – here a racing driver – in the loose reworking of the 1946 story, which switches the insurance investigator for the hitmen, grittily getting to the bottom of why their victim offered no resistance and who hired them and why.

THE KILLERS was orginally a TV project, shot in tight close-ups and edited for viewing on the small screen. But it was considered too violent for home audiences and eventually got a cinema release with a B movie. Don Siegel had honed his craft during the fifties with The Lineup (1958) and Invasion of the Body Snatchers (1956) and directed Elvis Presley in Flaming Star (1960) and became close personal friends with Clint Eastwood who later considered him his most important mentor. They went on to make The Beguiled and Dirty Harry together in 1971 and Escape from Alcatraz followed in 1979.

So by the time he made THE KILLERS Siegel was already an action pro and this is shown in breath-taking racing sequences and a masterful control of the narrative. Performance-wise, Marvin and Dickinson add hard-nosed style and sixties pizazz that would see them team up again a few years laters as thrill-driven lovers in Point Blank.

NOW ON BLU-RAY COURTESY OF ARROW FILMS AND VIDEO