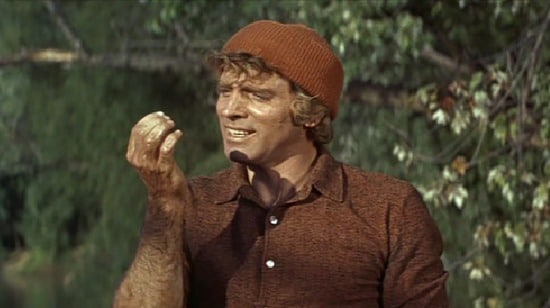 An attractive slice of Americana shot in rich autumnal colours and in widescreen to accommodate all Burt Lancaster’s teeth. Making this adaptation of Felix Holt’s 1951 novel ‘The Gabriel Horn’ (“with his own face in front of the camera most of of the time”, as the Allans disrespectfully put it) thereafter largely cured Lancaster of his yen to direct.

Set in the 1820s the film follows Lancaster’s Texas-bound Kentucky frontiersman gamely trying to raise his young son while desperately fighting off the evils of liquor and the charms of women, not to mention Walter Matthau’s whip-cracking local businessman.

With an appropriately recherché score by Bernard Hermann, the supporting cast includes John McIntyre as Lancaster’s brother (only their mother could tell them apart) and two blue-eyed elfin charmers in the form of Una Merkel and Diana Lynn. Villainy was supplied by Walter Matthau – looking older and heavier here in his film debut than he did ten years later; while Douglas Spencer & Paul Wexler as the cold-eyed Fromes brothers are a pair of ghouls that look like models for Grant Wood executed by Charles Addams.

The scene depicting the time it actually took to reload a shotgun in those days should be seen by all modern advocates of the Second Amendment. Richard Chatten.