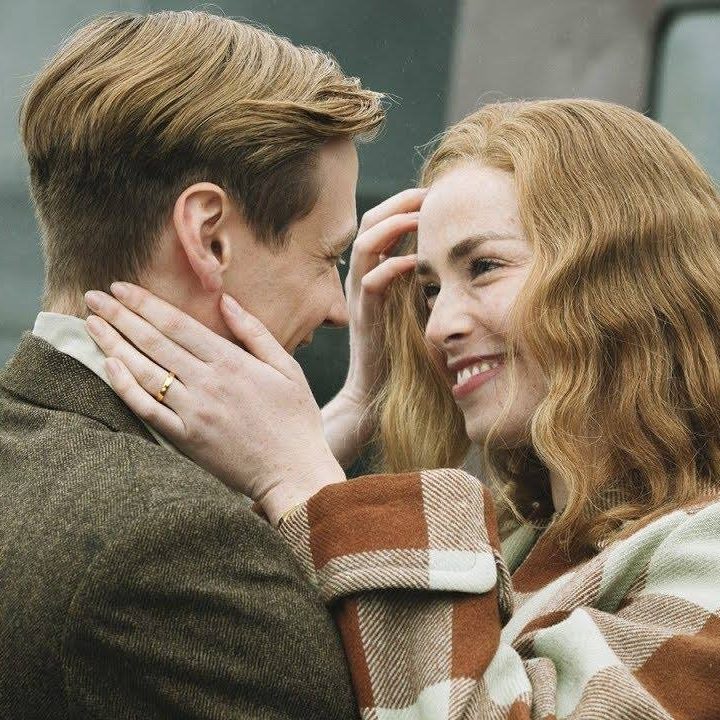 This worthy attempt at Anglo-German entente cordiale is a film of two halves, rather like the game at its heart. The Keeper is not sure whether it wants to be a wartime love story, a football drama or a tepid tale of karmic revenge. In the end it’s all three – but far too long: after the first hour, the tension has died down and we can’t imagine what remains to be said: The heroine has met her match, and scored.

The Keeper tells the true story of Nazi paratrooper Bert Trautmann (Kross) who became Manchester City’s goalkeeper just after the Second World War. But when he arrives at a PoW camp at St Helen’s just outside Manchester, the mood is hostile and the locals are traumatised by loss. The young German soldier is also suffering emotionally, haunted by the images of a little boy whose life he failed to save. But when he sets eyes on the football manager’s daughter Margaret (Mavor), who is already spoken for by a local lad, the chemistry between them sizzles, and he decides all is fair in love and war. And  Trautmann certainly has some ball skills – not to mention his blue-eyed good looks – which warm the cockles of Margaret’s heart, and the rest is history.

Having established Trautmann’s credentials as a goodie, with him (almost) becoming ‘one of the boys’, the second half of the film concerns his signing to Manchester City where he fetches up in October 1949, accompanied by his wife. It soon emerges via journalists digging around for dirt, that Trautmann was awarded the Iron Cross, a medal that had become a Nazi symbol during the 1930s – so the German footballer once again finds himself back-footed in the community, despite his crafty footwork on the pitch. Ironically, he then strikes up a solid friendship with the local Rabbi, who is inspired by Margaret’s efforts to speak up for her husband amid local hostility. Gradually Trautmann gains popularity as he bonds with local players and wins matches. The football scenes are the strongest element of this second half, with seamless CG crowds creating a rousing atmosphere for the likeable goalie. But then the film goes off in another direction to focus on the tragedy of Trautmann, the family man. And although this brings us full circle, by tying in this personal tragedy with that of the little wartime boy, somehow the drama fails to score top marks structurally with its lack of a real focus. Despite its flaws, Rosenmuller creates just the right atmosphere in postwar Lancashire with its glorious surrounding countryside. Performances are solid across the board, and Freya Mavor and David Kross – who smoulders in an Aryan way – make convincing lovebirds. Even if football isn’t your game, this is a watchable and good-looking wartime story. MT