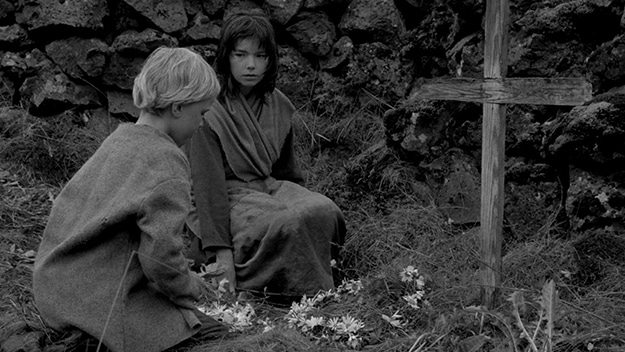 Iceland is a magical setting for this enchanting medieval black and white adaptation of a 1812 Grimm’s fairytale that sees two sisters forced to flee the homeland after their mother is stoned to death for practising witchcraft.

Filmed and entirely funded by American writer and director Nietzchka Keene (1952-2004) and her co-producer Alison Powell, the film eventually premiered at Sundance 1991 nominated for the Grand Jury Prize, Dramatic. Keene’s career was cut short but her final film, another female centric story, Barefoot to Jerusalem, was completed after her death, in 2008.

Icelandic singer Björk, in her feature debut, makes for a perfect heroine as Margit with her feral looks and delicate diction so evocative of this Grimm’s inspired fantasy with its horrific undertones. The German brothers themselves had been captivated by the painter Philipp Otto Runge’s original adaptation of The Juniper Tree. Hailed as Germany’s answer to our own visionary poet and printmaker William Blake, his mysticism and symbolism seem to fit well with the English artist’s. And although the Grimms dialled up the darkness with their themes of cannibalism and child abuse, Keene reflects this in her own lyrical version with its violent misogyny and witch-burning while at the same time questioning its moral code in an ascetic spiritual ambiance straight out of Carl Theodor Dreyer’s Ordet or even Bergman’s The Seventh Seal.

Margit and her sister Katla (a softly spoken Bryndis Petra Bragadottir) are wandering around stunned and looking for shelter after their mother has met her terrible death. Their recourse to witchcraft will be the only practical way of surviving in this bleak terrain where anonymity serves to their advantage, until they meet a widower called Johann (Flygenring) who has lost his wife, and been left with his only son Jonas (Pormar). Katla casts a spell on him and the foursome continue as rather unsatisfactory bedfellows, Johan deeply resenting Margit’s attempts to replace his mother by giving her weird and whimsical incantations short shrift with the sobering words: “she was better than you”.

Some may find the film too enigmatic even at only 78 minutes, but Bjork’s innovative presence gives a freshness that keeps The Juniper Tree otherworldly and radical rather than rooted in the distant past, and is this unique curio is definitely worth visiting. MT