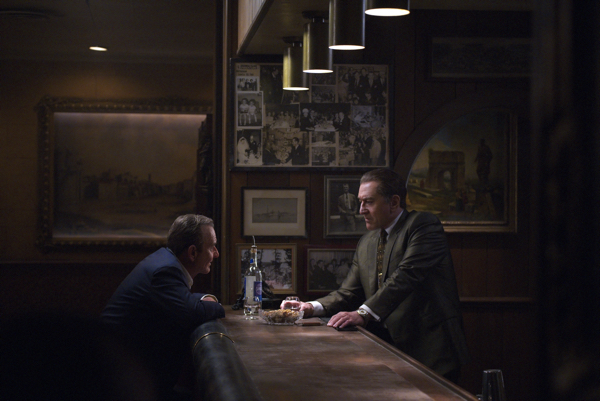 Much of the hype surrounding The Irishman has focused on the fact that it reunites Martin Scorsese with Robert De Niro and Joe Pesci for the first time since 1995’s Casino. It also throws Al Pacino into the mix, and marks a return to the mob-infused crime dramas with which Scorsese made his name. The excitement is understandable – Scorsese made a string of iconic hits while working with De Niro, and it was through these that he established himself as one of the great American filmmakers.

And yet… Scorsese’s body of work has a depth and breadth to it which is often obscured by a focus on certain titles (notably GoodFellas, 1990), and there was, perhaps, a fear that Scorsese’s return to this world might present if not a step backwards, at least a retread of ground already covered.

Fortunately, such worries prove to be unfounded: the world of The Irishman may be familiar – it even touches on the mob’s involvement in Las Vegas, which formed the backbone of Casino – but the tone is something new: though not without Scorsese’s trademark humour, the film trades the baroque exuberance of his earlier work for a more reflective pace, closer to the ruminations of Silence (2016) than the crashing excess of Casino.

Spanning multiple timelines set over several decades, The Irishman spends as much time examining the wiles of old age as the wilds of youth. In parts, the film almost plays like a eulogy: throughout, Scorsese uses titles to tell us how characters will die, and the film’s focus on death and aging seems like a lament for the end of an era – of a certain type of lifestyle, and a certain type of cinema. In the past, Scorsese has faced accusations that he glamorises mobsters, but here everyone seems to end up worn out, tired or dead, as if those are the only possible outcomes. The religious angst which has fuelled Scorsese’s work since Who’s That Knocking at My Door (1967) has here transmuted into a nihilistic acceptance of life as it is.

The story itself is drawn from the nonfiction book I Heard You Paint Houses, by former investigator Charles Brandt, and follows Frank “The Irishman” Sheeran’s career as a hitman for the mob, painting houses with other people’s blood. After being introduced by head mobster Russell Bufalino (Pesci), Sheeran becomes right-hand man to Jimmy Hoffa (Pacino), President of the International Brotherhood of Teamsters and a loan-shark to the mob, supplying them with funds from the Union’s pension fund. As the decades pass, the mob’s machinations extend from the union to the White House, installing and removing presidents to suit their needs – an offhand remark about one of the Teamsters’ love of golf makes for some interesting contemporary commentary.

Throughout the years, Sheeran’s conscience is troubled by disapproving glances from his daughter (for Sheeran has a personal family as well as his mobster family), but it is Sheeran’s friendships with Bufalino and Hoffa that really form the heart of the epic narrative, and which drive it towards its tragically moving conclusion. Given that the film serves, in so many ways, as a family reunion, it’s a fitting thematic thread and one which, thankfully, weaves a powerful tribute to the legacy of what’s come before it. Alex Barrett