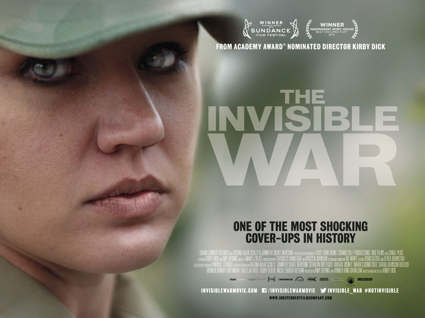 March 10th, 2014
Author: Meredith Taylor
Director: Kirby Dick
93min  US  Documentary
In this well-constructed and fascinating documentary, Kirby Dick exposes rape in the US Military: and not just rape of women but men as well. Rape is not a one-off occurrence but a regular part of army life for most recruits: it’s part of the territory: an occupational hazard.
An endless deluge of tearful soldiers talk about their experiences on camera. They are living testament to a system that knows no shame; young people who dreamt of serving their country only to fall victim to a military hierarchy who considers it their right to receive sexual favours from subordinates whose lives and relationships end in ruin due to their callousness.  It’s a fact that sexual predators migrate towards ‘the safety’ of army service, knowing their proclivities will be well-catered for in a system that operates outside the normal judiciary framework:  In the Military, the first line of contact is with the Officer in command and this officer is, for the most part, the perpetrator of the crime. There is no way out, in short.

There’s nothing worthy about Kate Dick’s well-paced treatment of her subject-matter – but the sobering facts are that one in five serving female officers has been sexually assaulted (500,000 since records began). The male victim rate is unclear but nevertheless significant. Women are made aware that any complaint will be met by a humiliating and futile procedure that knows no positive conclusion.  To add insult to injury, a poster campaign aimed at Army men: “Ask Her When She’s Sober” is the only measure in place to tackle the issue.

A chilling documentary that offers grim viewing, but is worth a watch for its sheer incredibility. MT

THE INVISIBLE WAR IS ON GENERAL RELEASE FROM 14 MARCH 2014