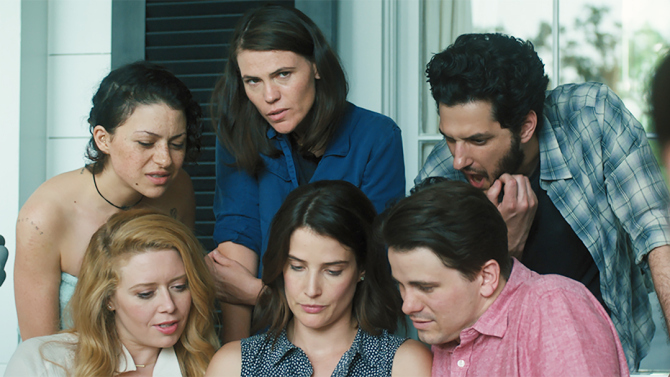 Actress turned filmmaker Clea DuVall’s debut, a gender-bending reunion comedy, is well-acted and watchable enough despite its trite take on relationships of the sexual kind. It follows a weekend get-together for a group of old timers who meet up in a glorious colonial country house where they end up judging each other with drastic consequences. THE INTERVENTION never really leaves the drawing board, despite some moments of insight: navel-gazing, self-analysis – call it what you will – it’s always a mistake to look at relationships from the outside in – as this group of unappealing characters soon find out but not always to their detriment. Does DuVall really think she’s being edgy or clever with her sexual shenanigans in the 21st century? Judging by THE INTERVENTION the answer is would appear to be ‘yes’.

The group of late thirty somethings is lead by DuVall herself who invites everyone to her Ralph Lauren-style Savannah estate where her unsmiling sister Ruby (Cobie Smulders) and bed-dodger husband Peter (Vincent Piazza) are encouraged – in a bizarre showdown – to seek a divorce. The passive aggressive initiator of this ‘group’ decision is Annie (Melanie Lynskey) who is having problems with her putative marriage to non-person Matt (Jason Ritter). Widower Jack (Ben Schwartz) who is dating 22 year-old Lola (Alia Shawkat), are also the target of much bitchiness but Lola turns out to be the saving grace.

From the get-go this premise is a non-starter but easy enough on the eye – the interiors and countryside providing most of the interest – along with mouthwatering food-porn scenes and lashings of ice cold liquor. Drunken accusations fly amid bouts of charades whereafter the couples retire for scenes of a sexual nature (why oh why do filmmakers dwell on endless boring sex scenes in a comedy?).

The upshot here is a mundane and moderately amusing drama where unattractive characters reveal nothing of consequence. MT