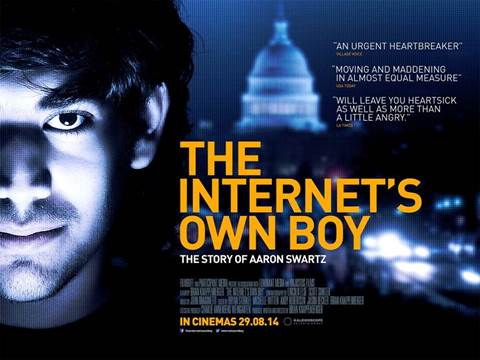 This is the story of a genius who fell foul of the state machine: Aaron Swartz committed suicide aged twenty six in January 2013, after being harassed by the Justice departments on account of the “Computer Fraud and Abuse Act (CFaAA)” of 1986 (!), which is obviously out of date and totally open to interpretations. Apparently House Member Zoe Lofgren (D-Cal.) introduced the Repudiation of the Act as “Aaron’s Law” in 2013.

Knappenberger’s documentary is bookended by home movies of little Aaron, who taught himself to read at the age of three: after enjoying “Paddingon Bear” we see him dancing joyfully. By the age of 14 he was working at the “World Wide Web Consortium”, helping to develop the ‘RSS’ standard. But it was not only the technical side which interested Swartz. Because of his theoretical involvement, he was very aware of the possibilities of misuse – and censorship. When “Reddit”, the independent site he had help to set up, was sold to Conde Nast Publications in 2006, Swartz did only last a few months, he was aware of the power of corporations – and the politicians which were in their pay. In 2008 he co-founded “Watchdog”, a site who kept tabs on the elected members of Congress. In the same year he authored a paper with Shireen Barday, looking at thousand of law review articles written by law professors, who had been paid by industry to write their ‘opinions’. And to cap a busy year, he “liberated” 20 million of pages of “PACER”, the archive of court records – using a small window, when the government allowed free access – usually the public had to pay eight cent per page.

The case which brought the justice department on the scene, started in September 2010, when Swartz accessed the MIT network for their academic database “JSTOR”, and after they blocked him, he found a restricted closet and hardwired his laptop to the network, beginning to download huge volumes from the data base. He was accused of four felony accounts, but rejects a plea bargain, which would have meant a year long house arrest without a computer and a felony record. MIT meanwhile was staying “neutral” on the case, even though they know, that if they don’t press for prosecution, the government has no case. On 17.7.2012 bail is set at $100 000. In October of the same year, SOPA (Stop Online Piracy Act) is introduced in the House, to great acclaim of all side. But after a campaign culminating in the 24-hour blackout of the “Wikepedia” site on January 18/19 2012, the bill is pulled. In December of the same year, Carmen Oritz, US Attorney for the District of Masschusetts, and her deputy, the Assistant US Attorney Stephen Heyman, charge Swartz with more charges felony offences, by now the penalty has risen to 50 years in prison. On the 11.1.2013 the defence files a motion to supress evidence from correspondence between Heyman and the Secret Service. On the same day Swartz takes his own life in Brooklyn, New York.

Most harrowing is the interview with the computer journalist Quinn Norton, Swartz’s partner from 2007 to 2010. She was bludgeoned by the Justice Department for a “proffer”, a judicial term for a forced witness statement. Quinn would have gone to jail, if the Justice Department would have forced her, (as they threatened) to give up her password for her computer, containing her confidential files. She chose to be a witness, and was tricked into giving evidence, that might have been used against Swartz at the trial. Their relationship ended, even though they became friends later.

The material is overwhelming, to say the least, but Knappenberg focuses on the salient facts, keeping up a brisk pace, engaging the viewer in this rollercoaster action documentary. The camera always finds new ways to avoid “talking faces” and the narrative is never dramatized. But a tragedy it is nonetheless and the waste of a life of a genius; damming the government for its complicity. That nobody prosecuted Bill Gates or Steve Jobs for breaking the CFaAA – stands out as a resounding reminder; but then THEY only wanted to make money. AS