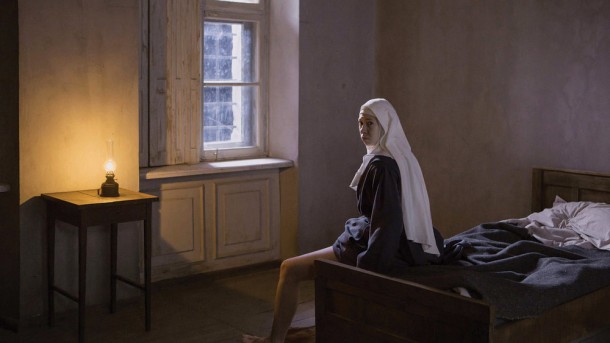 Director and co-writer Anne Fontaine (Emma Bovary) creates an emotionally intense, aesthetically outstanding and politically brave film. Set in rural Poland in December 1945, THE INNOCENTS draws on material by the French doctor and resistance fighter Madeleine Pauliac (1912-1946) who was a Medical Lieutenant in the French Army and a member of the ‘Blue Squadron’, an all female unit involved in repatriating displaced citizens after the WWII.

Mathilde Beaulieu (de Laage) works in a field hospital in the Polish countryside. The war wounded are still dying, but the psychological impact on the even more serious, as Mathilde will soon find out when she meets Maria (Agata Buzek) a nun from the nearby cloister, who approaches her in a desperate state of mind, asking for help. Smuggled into the cloister by Maria, Mathilda finds out that more than a dozen of the nuns are pregnant, having been raped by Russian soldiers. Mother Superior (Kulesza) is against any outside help, she wants to sweep everything under the carpet: the esteem of the cloisters in the eyes of the outside world is more important to her than the physical and mental wellbeing of her nuns. With the help of her lover, the Jewish doctor Samuel (Macaigne), Mathilde intervenes to help the women but the Mother Superior remains deeply troubled and devises a scheme of her own.

Agata Kulesza – brilliant here as the Mother Superior – was cast as the die-hard Stalinist in Pawlikowski’s Ida. Both Catholicism (together with some other religions) and Stalinism (in common with other authoritarian ideologies) represent a deeply inhuman ideology (camouflaged by a canon of salvation for the worthy), with often deeply misogynist tendencies. The Mother Superior is hell bent on being the executor of a dogma, punishing “her” women again, after their traumatic experience with the Russian soldiers. And, like the Stalinist gospel, it is all about blind, intransigent submission: “We cannot doubt her, we can only obey her” says Maria to Mathilde at first – but her later defiance will save lives. Samuel, whose parents were murdered in Bergen-Belsen, and Mathilde, from a working-class background, are the sceptics: they have seen enough horrors not to rely on any religious or political faith to cloud their judgement. Focusing on their humanitarian convictions, they don’t select victims, but help them all. Needless to say, both of them are ‘suspects from the sinful world’ for the Mother superior. Their own low-key romance helps to leaven the austerity of the Convent theme, with Macaigne injecting some caustic moments of humour to an otherwise severe scenario.

DoP Caroline Champetier again works wonders with natural light. She frames landscapes, cloisters and the hospital with a limpid and painterly lens that seems illuminated by candllelight to show the darkness of the era. The delicately rendered interior scenes glow with a gentle purity and those in the snow evoke a white shroud placed over all the mass-graves of those that have fallen. THE INNOCENTS is never melodramatic with Fontaine keeping a detached eye in spite of the emotional turmoil, but this makes for an even even more harrowing drama. Whilst getting the balance between form and context right, the real success Is her ability is to create an overwhelming emotional impact, which remains for a long time.

ON GENERAL RELEASE AT PICTUREHOUSE CINEMAS FROM 11 NOVEMBER 2016|