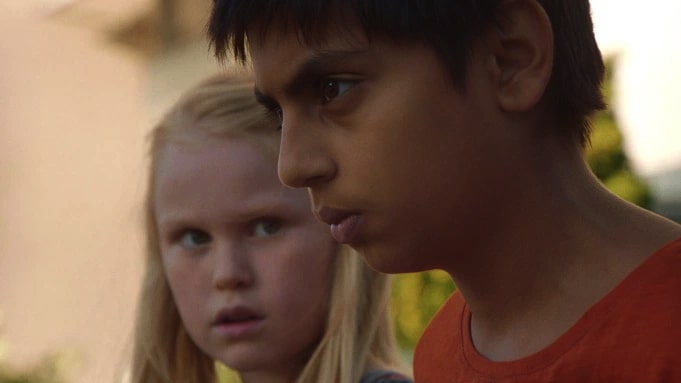 The Omen meets Jack Clayton’s 1961 titular original in this haunting arthouse horror trip from Eskil Vogt who explores the parallel world of children in his chilling second feature.

The Innocents follows his eerie experimental drama Blind with this textured thematic look at casual violence and subversive behaviour in a group of young friends growing up in small-town rural Norway.

Seen entirely from the children’s point of view this is a deeply sinister and often violent film, at times frighteningly so, but subtle as a whisper. A sense of terrible dread seethes as the plot unfolds, Vogt spending rather too much time establishing the milieu of a modest domestic set-up before hitting the jugular in full blown psychological horror that dives deep below the surface of ordinary young lives.

Freed from the mundanity of running their lives kids are free to let their imaginations wander. And wander they certainly do in a serene suburban idyll surrounded by pine forests and sparkling blue skies that create an oppressive sense of isolation for the blonde-haired angel-faced Ida, played by Rakel Lenora Flottum, her autistic and mute older sister Anna (Alva Brynsmo Ramstad) and their kindly but ineffectual parents (Ellen Dorrit Pedersen and Morten Svartveit).

The kids are free to roam far and wide and soon become firm friends with tousled-haired Aisha (Mina Yasmin Bremseth Asheim) and the levantine Ben (Sam Ashraf impressive in debut) whose background is more troubled, in one violent scene he throws Ida’s pet kitten from the top of the stairs and crushes the crippled animal’s skull – without any remorse. Ben also develops telekinetic powers not unlike Danny in The Shining but Ben’s are put to nefarious use in sending a boiling pan of water over his single mother (Lise Tonne) while he carries on oblivious.

An eerie soundscape from Gustaf Berger and Gisle Tveito ramps up the tension as Ben’s powers come into conflict with Anna’s benign psychic sense as a turbulent battle of wills plays out completely beyond the radar of the adult world.

As the film edges towards its startling finale Vogt creates a distinctive and highly-tuned alter universe in a lushly cinematic supernatural horror that remains tethered in reality while sending out shockwaves of terror with lowkey but chilling affect. MT