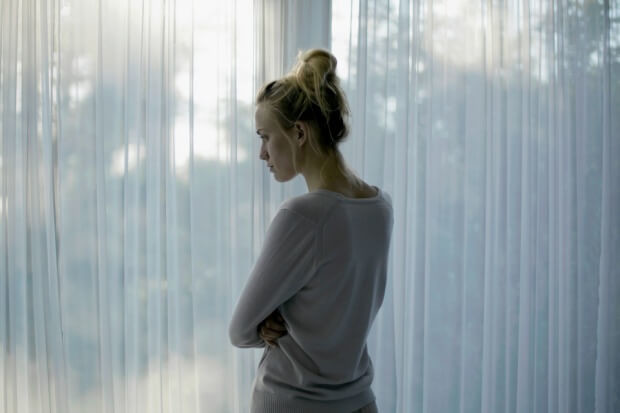 A rather unsatisfying and typically British class drama whose message is enigmatically couched in a series of polite middle class characters who exchange doleful glances but fail to make THE INCIDENT resonant or rewarding as a piece of filmmaking.

In an impressive central performance Ruta Gedmintas does her best as Annabel to stretch the wafer thin narrative into something meaningful. Various incidents do occur but we are never sure which one Linfoot is referring to in her enigmatic title. Is it the initial one where Annabel’s unsatisfied architect husband Joe (Tom Hughes) has it off with troubled teenager Lily (Tasha Connor) in the confines of his car? Cracks were already visible in the facade of their marriage and they irritate each other in every scene.

Or is Linfoot alluding to the second interminably long but undeniably frightening incident where Lily turns up at the couple’s home, blind drunk and rocking a jaunty balaclava, when Annabel is alone, startling her before then disappearing without further ado?.

After a while the film gradually loses its momentum as it wanders into a didactic exercise in the British class system where the teenager is villified while the married couple discretely cough and distance themselves from the rather unfortunate scenario, deciding to ‘keep calm and carry on’ in an increasingly alienating denouement.

For the most part, THE INCIDENT fails to get under the skin of its characters, but perhaps this is what Linfoot intended in portraying typical English reserve. Hats off to Ruta Gedmintas for making it strangely compelling and watchable for her performance alone. Cinematography is also to be applauded, reflecting the mournful mood and sober aesthetic of muted shades with intimate close shots and subtle lighting techniques. Linfoot could have dug deeper into the rich morass of moral issues behind her storyline but decides not to and this is why THE INCIDENT ultimately feels as hollow as Gedmintas’ beautifully sculpted cheekbones. MT