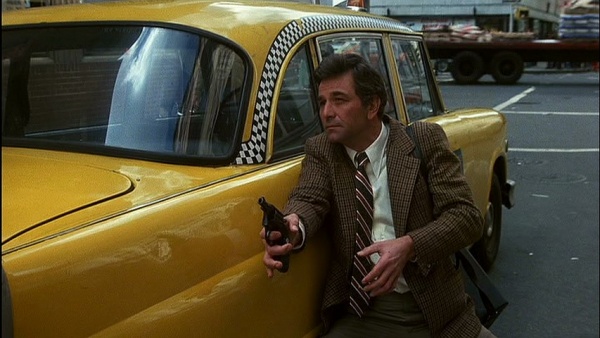 Born 1923 in Canada, veteran Hollywood director Arthur Hiller is best known for Love Story, See No Evil, Hear No Evil and the comedy Silver Streak. But with The In-Laws. scripted by Andrew Bergman (Blazing Saddles), he was way ahead of his time, as countless (and inferior) “Focker” movies have proven.

New York dentist Seldon Kompett (Arkin) meets Vince Ricardo (Falk) in a restaurant: the two are going to discuss details of the upcoming wedding between Barbara Kompett (Peyser) and Vince’s son Tommy (Lembeck). But Vince surprises Seldon with a vivid story about giant, beaked Tse-tse flies, who steal New York’s children. Seldon, as straight as possible, is soon plunged into an adventure by Ricardo, who claims to be a CIA agent – alas, Seldon soon learns that Vince has been sacked from the CIA, for being mentally unstable. A diagnosis, he is going to verify soon: he has stolen plates from the US Minting Press and wants to use them to uncover the wickedness of an South American dictator, General Garcia (Libertini), who uses a hand-puppet named Señor Pepe as his mouth-piece. Whilst gangsters who have uncovering Vince’s plan to steal the plates are chasing the duo all over New York, Vince finds time to chat with a cabbie. To get to South America, Vince has hired a private plane with a crew who can only speak Mandarin, and after their landing they are welcomed by an array of hit-men, who turn out to be even more incompetent than Ricardo.

Falk and Arkin (“There is no reason to shoot at me, I am a dentist”) are the odd couple on the run; they complement each wonderfully. DoP David M. Walsh (Private Benjamin) uses all the tricks in the book to satirise all genres. Anarchy rules, and the tempo and guts of The In-Laws is as infectious now as it was then – unlike the tame 2003 remake with Michael Douglas and Albert Brooks. AS