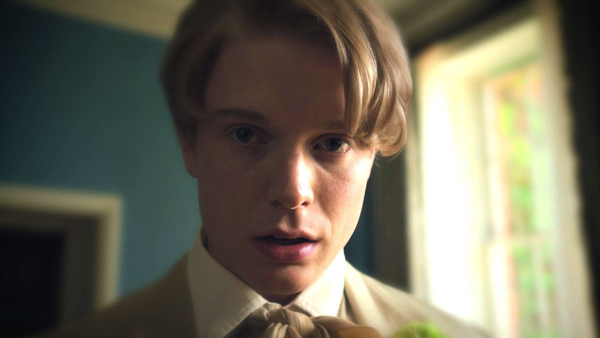 If you are expecting another amusing arthouse drama from one of Ireland’s greatest writers, you will be disappointed by this pot pourri of Wilde’s work. Director/producer Richard Curson-Smith, whose TV portraits of Nureyev, Ted Hughes and Francis Bacon are highlights of the BBC programming, fails in his attempt to have Wilde scholars connect his work with his stormy life story. The Importance just makes you yearn for a whole play, especially with this fine assembled cast of Freddie Fox, Anna Chancellor and Ed Stoppard. And although the dramatised excerpts are enjoyable in themselves, there are too many talking heads, the only engaging commentators on Wilde being Giles Brandreth and Stephen Fry who share early tit-bit such as his appearance in ‘Punch’ magazine.

They discuss Gilbert & Sullivan’s Patience (1988), a parody of the genius-in-the-making. We learn, that Wilde went to the USA in 1882, and was greatly impressed by the circus impresario Phineas Taylor Barnum. On his return he became, among other occupations, a contributor and editor to London outlet ‘The Strand Magazine’. From this era there are  excerpts from The Canterville Ghost (1887), a short story. There is an interesting (part) dramatisation of his essay The decay of Lying (1882). Equally captivating is De Profundis (1897), which got the same treatment as the above mentioned essay, quoting from Wilde’s letters from prison, published posthumously in 1905.

But his famous society plays, as well as a part adaption of The Portrait of Dorian Gray make up most of the running time, and commentary concentrates on the well known trial of Wilde for homosexuality, instigated by the Marquise of Queensbury, whose son, Alfred Lord Douglas, was Wilde’s long term lover. What the film does establish is that Wilde was imprisoned not so much for his homosexuality but because, as a wealthy man of society and standing, he took advantage of less fortunate members of the community in the shape of rent boys desperate for money. As such Wilde’s story connects to the narrative of the #metoo movement.

Wilde’s grandson features but adds nothing sparkling to the party and DoP Graham Smith’ images are perfunctionary. And this is one example where an attempt to cram the life and work of a major literary figure into just 84 minutes should be questioned. Surely, the subject deserves much more – and this goes not only for the length of this rather flimsy affair. AS