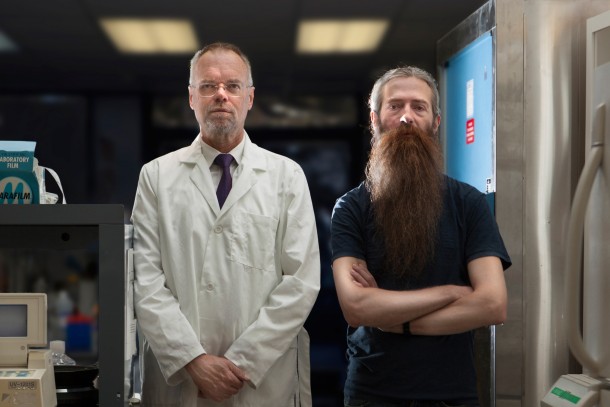 Finding a cure for dying; making humankind immortal: these medical solutions may be not around the corner, one reckons on about 25 years. Jason Sassberg meets the scientists struggling with the issues of getting us there: it really makes you wonder how people can talk seriously about “living forever” or “measuring our lifespan in thousands of years”. There are psychological problems, apart from our already over-crowded planet and questions of ethics: if there ever was a pill for eternal life it would most certainly not be sold over the counter, as predicted by one researcher, it would just be found in the medicine cabinets of the super-rich.

Scientists face many unresolved problems, among them clearing humans cells from garbage – like housecleaning; or the telomeres, long living cells, which are found in above average numbers in cancer tumours and have therefore to be isolated, otherwise they would kill instead of giving longevity.
But the real revelations of this documentary are the proponents of the usefulness of this research. One, Dr. Aubrey de Grey, a theoretical biologist from Cambridge, looking like Rasputin, very fond of beer and women, discusses at the Oxford Union the pro- and cons of research funding. His opponent, a rather subdued Dr. Colin Blakemore, talks ethics, and de Grey is scathing in his reply. He is a good salesman, but somehow his glibness falls on deaf ears: the mainly young student audience rejects his motion, seemingly happy with our usual lifespan. Later, we learn that de Grey has found new funding and a working place in California, where he will live with his two girlfriends, leaving his wife, also a scientist, behind. Somehow one has the feeling with de Grey that he is much more a guru than a scientist.

Bill Andrews, an American proponent of the search for immortality, is a sober and earnest man, but something of a health freak: together with his wife (very much livelier and fitter than the good Doctor) he participates in a sort of treble marathon in the Himalayan mountains. Having nearly killed himself during an abandoned try in 2011, he repeats the trial again two years later, and has to withdraw with chest pains. With the encouragement of his wife, he finally finishes the course walking. Andrews, whilst being much more sober than de Grey, still lacks any imagination of the social implications of any breakthrough.

There is no mention of spiritualism or re-incarnation here and these scientists seem every bit as whacky and weird and many of those who peddle the constant stream of new-age beliefs. Even though the topic is very serious indeed, THE IMMORTALISTS is rather fun to watch. The proponents of eternal life are somehow proof themselves that humankind does not need or deserve an even longer stay on this planet than our ‘three score years and ten’, that was the ideal in biblical times. We create already enough sadness and destruction in our present life-spans – for ourselves and the environment – any concept of even more longevity for our species is frightening, but, alas, it may still happen. AS