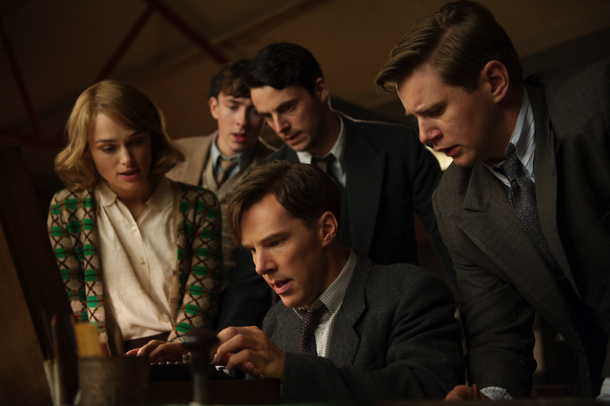 Tyldum’s moving biographical feature tells the story of the most unsung hero of British wartime and scientific history. Alan Turing (1912-1954), not only (nearly) single-handedly cracked the code of the German Enigma machine during WWII in Bletchley, shortening the war and saving millions of lives, but his Turing machine was also the first digital computer. THE IMITATION GAME explains why he didn’t become the household name he deserved to be: a sad tale then of a genius betrayed by an ungrateful country and a bigoted establishment.

For once, the use of dramatic liberty used in the narrative of this drama is legitimised by the fact that only such an artistic approach will ensure that Turing’s legacy is made known to a wider public. The events of Turing’s life are played out on three levels: the largest part is obviously reserved for his work on Enigma; his boyhood experience, the bullying and first crush on a boy called Christopher at Public School, and finally, his rather sordid end in Manchester, were he was convicted of indecency and chose a hormonal treatment, otherwise known as chemical castration, as an alternative to a two-year stretch in jail. After a year of treatment, Turing committed suicide, in love with his ‘Machine’, which he named – like the Enigma code breaker – ‘Christopher’.

Cumberbatch plays Turing as an eccentric often arrogant but usually reserved man, who is socially awkward, dissociating himself more or less from emotional life and his fellow humans; finding solace only in numbers and their application. He loved his own company and we frequently see him running long distance – the real Turing was a gifted marathon runner, nearly qualifying for the London Olympics in 1948. His time at Bletchley is memorable for his relationship with the cryptographer, Joan Clarke (Knightley), who wants to marry him, being unfazed by Turing’s self-confessed homosexuality. The two outsiders (Clarke was the only women in the team of ‘Hut 8’ were the code breakers worked), found solace in each other’s company, but Turing was unable to have a close relationship with anybody, regardless of their gender, and he broke off their engagement. The film overplays the rivalry between Turing and Hugh Alexander (Goode), who was the team leader of ‘Hut 8’, but Turing was hardly interested in the administrative duties this post brought with it. After Turing’s death Hugh Alexander was adamant that “there should be no question in anyone’s mind that Turing’s work was the biggest factor in ‘Hut 8’ ‘s success”.

After Bletchley, Turing worked on the Turing machine, based on his seminal paper of 1936, which was a modern computer but for its name: “Except for the limitations imposed by their limited memory stores, modern computers have algorithm execution capability equivalent to an universal Turing machine”. In 1948 Turing devised a chess programme, which beat a human player.

Tyldum’s approach is deeply humanistic because he avoids the ‘tortured soul’ treatment, Cumberbatch’s Turing is shown as just marginally off and very capable of psychological insight: “From contradictions you can deduce everything”. Whilst everybody around him could decipher the social niceties of white lies, he was so detached by choice, that he just listened to WHAT was said, making social engagement between him and the rest of society difficult. Knightley plays Clarke with the same understatement, her isolation caused by gender, Turing being the first man, who took her seriously as a scientist. The wartime atmosphere is lovingly recreated with great attention to detail. The camera encircles Turing and Clarke from above, as if finding specimens of particular interest in an experiment. In spite of some (perhaps unavoidable) clichés, THE IMITATION GAME is the rare exception of a mainstream movie not selling out. AS