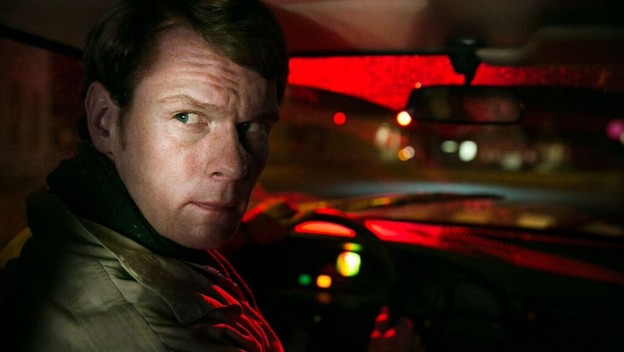 THE IDEALIST is a docu-drama featuring the journalist Poul Brink (1953-2002) whose research between 1988 and 1995 uncovered a conspiracy involving one of the greatest political scandals in Danish history that still reverberates today.

Christina Rosendahl, known mostly for her documentaries such as Stargazer (2002), here reconstructs the events that started on January 21th 1968, when an American B-52 bomber crashed near Thule airbase in Greenland (which is still is more or less a Danish colony). Carrying four hydrogen bombs – only three were recovered – the accident disappeared from history. Twenty years later, the radio journalist Poul Brink (Plaugborg, In your Arms), working in Jutland, discovered that the majority of about 30 workers, who were used in the cleaning up operation “Project Crested Ice” after the Thule accident, had developed skin cancer, some of their children were born disabled. The workers, who underwent scans, all got letters from the Danish Health service, telling them that they were healthy.

It is here where Brink’s work starts by convincing the Health Service bureaucrats to come clean. But during his research of the Thule incident, Brink stumbles into revealing a much more potent scandal: Danish governments of the post WWII period, mostly led by Social Democrats, had opposed nuclear weapons. But in 1957, the than Prime Minister Jens-Otto Krag had signed a secret agreement with the US government, allowing them the use of their territory to ferry around nuclear weapons. Like true gentlemen, the US government helped to supress any information about the Thule incident, particularly since the Social Democratic government of JC Hansen faced a General Election – which they lost anyway – a few days later. During the seven years of his battle to have the government owe up, Brink usually got answers along the lines of “this happened under the Social Democrats” or “they were different times”. The journalist chases one of the US participants in the cover-up to his home in Texas, where the police remove him from the premises. Finally, he uncovers the secret document, but is threatened with a prison sentence by the Danish authorities, if he would reveal the document in full. After Brink resists, he lives one year under the shadow of this threat. The whereabouts of the missing hydrogen bomb is still an issue in Greenland,, fighting for full independence from Denmark – after all the bomb was 73 times more powerful than the one exploded over Hiroshima. And whilst the workers were compensated with 5000 GBP (!) each, the Danish government never apologised for the incident or its cover-up.

Rosendahl does not concentrate on Brink – apart from scenes showing him with his Spanish girlfriend Estibaliz Hernandez (Jover) and his son Kristian whom he alienates with his obsessive struggle for the truth – but uses him as a dieu-ex-machina who drives the story forward. Newsreel clips accompany this powerful docu-drama which champions a man possessed by finding the truth – an idealist who had believed in the honourable history of his country, only to be confronted by an insane level of secrecy and threats. AS